b r o o k l y n t w e e d
10.27.2006
West Siiiiiide! I'm off for a quick west coast tour - I'll be hitting up LA, San Fran, Portland and of course Seattle over the next 8 days. They're calling it a business trip, but to me its clearly time to see friends and catch up on knitting.

I'll be meeting up with some of the lovely ladies of blogland tomorrow morning - very exciting! As far as projects: I'm bringing sweaters. Only. 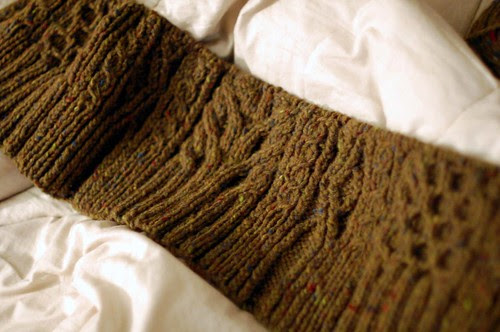 it grows.
I may not be posting throughout the week. My apologies in advance if I dont respond to e-mails or comments in a timely fashion. My internet access will be spotty at best.

I'll leave you with some eye candy - it is friday after all. 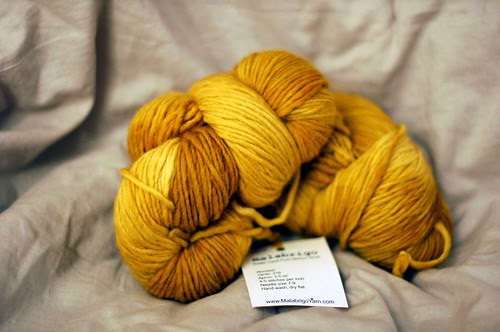 Comments:
The cable sweater is coming along beautifully. I really like the color the more I see it knit up! (it looks a lot like some Tahki Soho Tweed I knit my Banff in)

The yellow/gold will be a perfect pick me up for the eyes this winter!

What pattern are you doing?

Have fun out West.

AJ : 27 October, 2006 11:10
Have a great trip! We're having great weather here in the San Francisco Bay Area. When in SF -- if you have time -- don't miss the De Young Museum or ImagiKnits and the cadi-corner tea shop.

Stephanie : 27 October, 2006 11:36
I am starting to believe that the extra spaces between the letters in your names represent that you are not one, but many people. This would explain the ramped-up knitting speed. Have a ball! Put in a good word for me with Sundara, pretty please?

JulieFrick : 27 October, 2006 12:06
If you have time while in Portland, PLEASE stop by Mabel's. It's a knitting cafe with excellent coffee and all of us who work there are very friendly. More importantly, I'm an avid reader of your blog, and I would love to say hi, since you'll be in the knitting paradise of PDX.

And, of course, we have gobs of delicious yarn.

Eva : 27 October, 2006 12:06
P.S. The tea place across from ImagiKnits (in SF) is called Samovar. Supposedly Leonardo DiCaprio has been there more than once, so it's a big celeb hangout. ;o)

Have a blast on your trip - the growing sweater looks phenomenal!!

PS: Only sleeves left on my Jarrett - I keep coming back and checking yours for inspiration. :)

And that Malabrigo is some nice eye candy.

And the sweater is coming along nicely. Have a safe and fun trip!

Anonymous : 27 October, 2006 13:12
i'm just loving how that sweater is turning out! your cables down to the ribbing look so crisp. it's gonna have nice detail.

have a great trip! travel safe!

spajonas : 27 October, 2006 13:19
Mmmm. Great colorway. What progress on the sweater too! Enjoy your trip and hopefully the weather will be better there than in the northeast this weekend!

Anonymous : 27 October, 2006 13:49
The sweater is looking awesome! Knit travelling sounds like a lot of fun. I'll be hitting SF, Portland and LA too, but not at the same time, unfortunately. Have a good trip!

Anonymous : 27 October, 2006 14:04
hey! thats a really combination of cities. I'm in SF & have lots of yarning recommendations. Also, CWS (chicks w/ sticks - there are boys too) meet-up is on Monday nights at Bliss Bar on 24th Street in Noe Valley.
Email me if you want some recommendations!

Cristina : 27 October, 2006 14:11
Welcome back to the Northwest - I didn't know you were from Seattle. I'm in Portland now, but I'm a Washingtonian by birth and upbringing. :) Have a great trip, and do make some more progress on those beautiful sweaters, because I could look at pictures of them all day!

knitbot : 27 October, 2006 22:08
That sweater pic is really nice. I've never been tempted to knit an aran sweater, but that looks like something it would be nice to knit just for its own sake.

Laughingrat : 27 October, 2006 22:52
you've totally got me wanting to jump on the saddle shoulder aran wagon. and the malabrigo is the perfect color of mustard i have been obsessing over lately. it looks so squishy, yum.

crumbs & co. : 27 October, 2006 23:20
I was going to tell you to be sure and visit Churchmouse Yarns on Bainbridge Island, but that was before I discovered that you come from Seattle. I'm sure you're very familiar with it, as it's the best and prettiest of all yarn shops in the area (which is sayin' a lot!)

I love your luscious photos and I'm following your Zimmermania creations with great interest. Happy travels!

Carol : 28 October, 2006 09:16
Such prettiness. Have you seen the men's sweater in Yarnplay? It's actually the first time my husband has ever seen something knitted that he liked!

Jenn : 28 October, 2006 12:13
Wishing you a great week for catching up with your friends and knitting. Your cabled sweater is coming along nicely, love the details, and your yarn looks so nice. What is the plan for that skein.

Kelly : 28 October, 2006 20:54
Have a great trip. You will definately experience some fall weather out here. It has finally turned and I love the cooler weather!

That yarn is delicious!!

(If you happen to be near Monterey on Tuesday evening, we have a stitch & bitch from 5-7 in Pacific Grove.)

amy : 30 October, 2006 00:12
I just got a scarf from the International Scarf Exchange that was done in Malabrigo. It is very soft and spongy.

I hope it wears and washes well. I'll let you know.