b r o o k l y n t w e e d
5.21.2008
Striped Vest in Handspun and Recycled Tweed First, my apologies for stringing you all along bit by bit with this piece. In truth I knit the thing from start to finish in a very short period but like to take a little extra time with presentation. Plus I loved photographing this thing! Not to mention the obvious fun of milking a good steek for all it's worth. 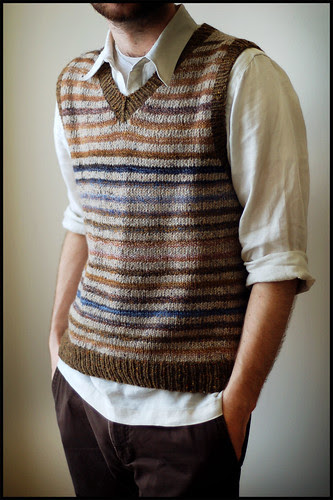 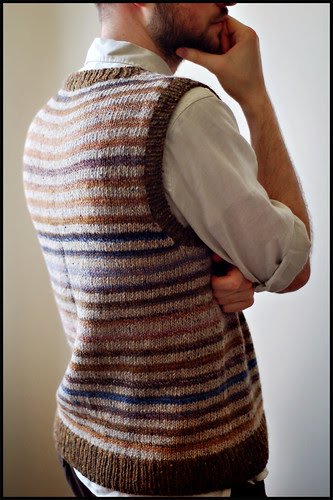 This was one of those projects that came together eerily well, on it's own, with very little planning. I had just finished spinning a batch of Shetland that I becom very fond of. I had a good amount of it - about 9 oz. of aran weight - and didn't want to knit a small project, but knew there wasn't enough for anything substantial. A few day's earlier my sister-in-law had sent me this wool sweater she had picked up in Portland from a thrift store. When the vest urge hit me hard, the handspun and the sweater were sitting quietly next to each other in the corner when the big yellow light bulb appeared over my head. 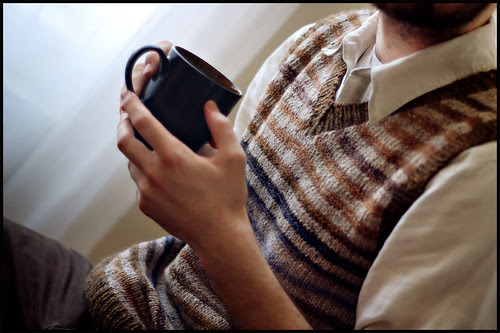 I swatched a small square, striping the two wools together and really loved how it felt and how the colors looked together. After I had my gauge, I was off and running. The rest is all kind of a blur. 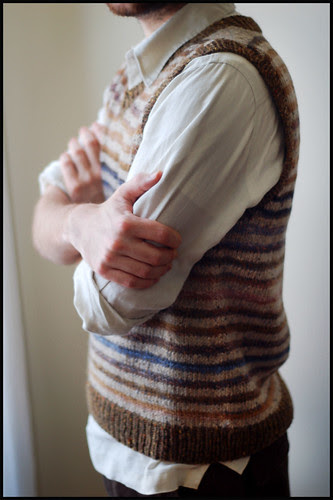 Vests are wonderful - it's like taking all the thrilling parts of sweater knitting and condensing them down into an efficient summary. No sleeve monotony (the second one undoubtedly causes a temporary lapse of excitement in my process), very little shaping, and steeking, means essentially knitting a tube on autopilot with intermittent technique shifts to spice things up. Just when all that stockinette is starting to wear on you? Armholes. And when you're ready for a little more? Neck Opening. Before you have a chance to get bored? Shoulder shaping. And bam, you have a steek-ready garment. Once you're at this point, nothing can stop the steek-induced excitement and seeing the odd shaped conical tube bloom into its vest-shape is worth every stitch. It's a great rhythm. 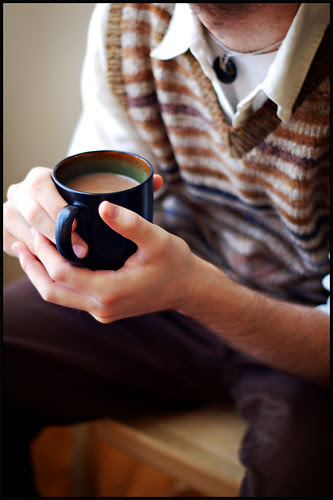 As for a pattern, I didn't really use one. If you're comfortable with seamless sweater construction, it's an easy jump to wing one of these. I recommend using Knitting in the Old Way by Priscilla Gibson Roberts as a reference. This is by far one of the most well-loved books in the my library, and if you're a sweater constructo-phile like me, this is essential reading. I also referenced EZ's Knitting Workshop to compare her armhole and neck opening specifications (vague but useful). Vests need a slightly more exaggerated armhole depth (mine was about 10.5" before knitting in the armhole ribbing) than their sweater counterparts, but other than that, measurement-wise things are essentially the same. 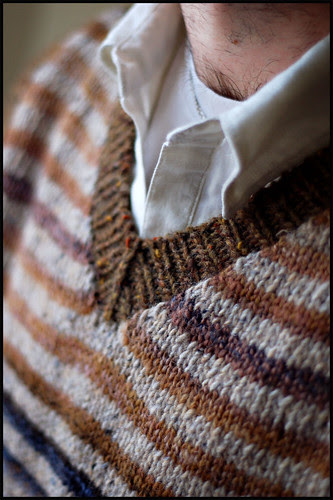 I worked a "slip 2 as if to knit, k1, pass 2 slipped stitches over" centered decrease every other round on the neck ribbing to create the central ridge at the bottom of the v-shapd opening. I used both tubular cast-on and bind off for all the ribbing to add that special finishing touch. Where ribbing is concerned, this is my favorite starting/finishing technique 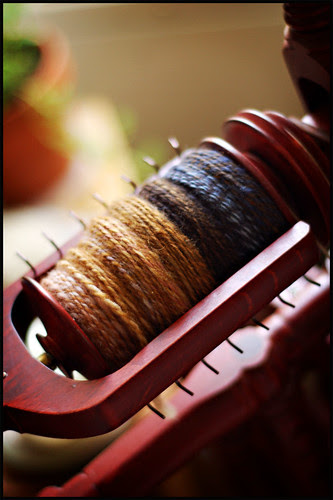 Now, lets talk a little about steeking - many of you have e-mailed me questions about my method. I'm a die-hard believer in the traditional crocheted steek. I'm anti putting a sewing machine to my knitting and I love the finish and process of securing everything by hand and with wool. I steeked this project in the exact same manner as my Saddle Shoulder Aran Cardigan last year. [Check my April '07 Archives for an exhaustive amount of photos on this steeking method] 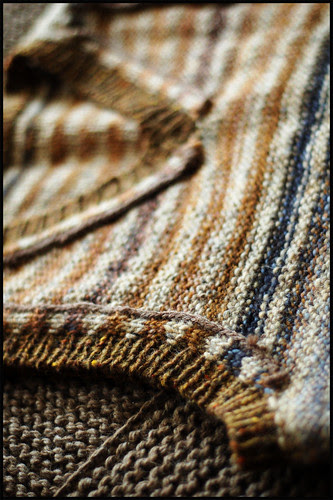 This is what the facings look like on the inside.
If you feel an innate desire to steek - do it! It isn't scary, if you play by the rules, and it's really, REALLY fun. And in my opinion, it makes garment knitting much more intuitive and enjoyable. I'm not a big fan of purling, so it's a technique that I like to employ whenever possible. The definitive online steeking compendium is Eunny Jang's and can be found here. Everything you need to know is there, so no excuses for all of you who sent me guilty e-mails admitting to your masochistic urges to cut your knitting. 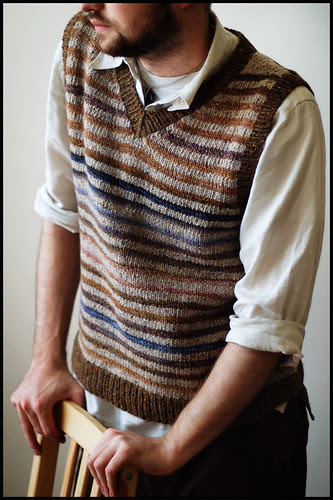 I've never been a vest wearer, in fact I can't ever remember owning one, but now I'm a changed man. I've already found this thing very useful for keeping warm without overheating. It's very rain-jacket friendly and looks good layering with a lot of different things. Most of all, though, I think I just like having handspun on my person at all times.

I'll be out of town from tomorrow (Thursday) through Sunday - I'm taking a little vacation. When I come back - I have more finished knits to share. Until then, good knitting. 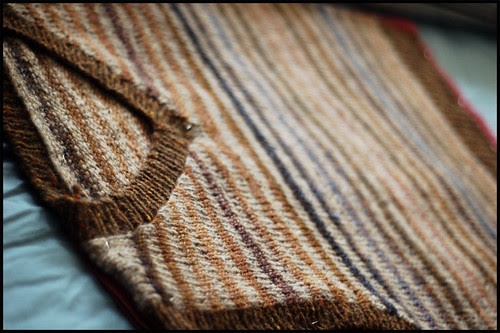 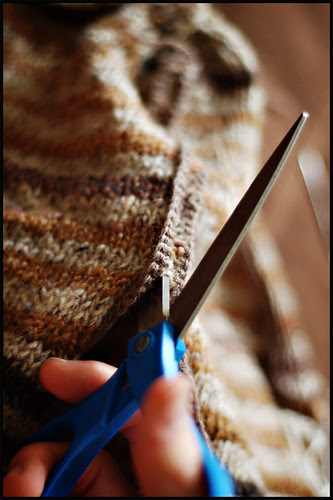 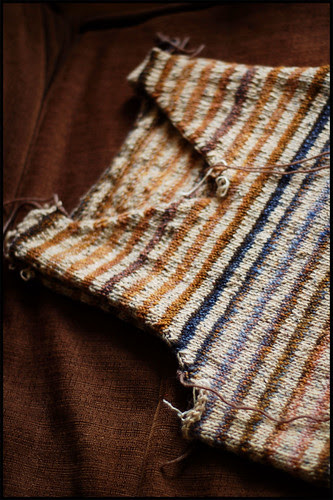 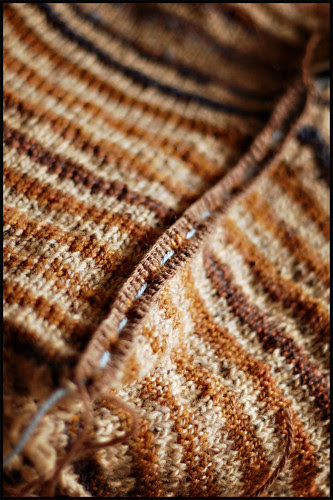 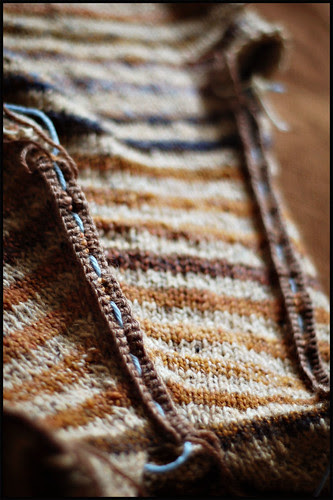 5.12.2008
Knitting, How I Love You My knitting and I have been enjoying a long-overdue reunion over the last few days. Really, it's more like a second honeymoon. I've been an absolute glutton with my wool and needles , choosing knitting over literally anything else (friends, laundry, eating... nothing is safe!).

I was doing so well taking care of languishing projects and cleaning up loose ends. I thought my annual spring cleaning of stash would help me get a realistic perspective on both current and future knitting, while giving me the sense and control to conjure a game-plan for finishing WIPs. Wrong. Quite the opposite happened, in fact. I uncovered many long-forgotten stash jewels, falling prey to many a fiber spell. I must have blacked out for an afternoon, because when I woke up I was surrounded by multiple new projects. I blame Ravelry. I always blame Ravelry.

I wasn't even sure where to begin with blogging, there's so much going on all of a sudden. And, I actually have time to tell you about it. I think I'll take the haphazard route of random-project-photo-flashing? 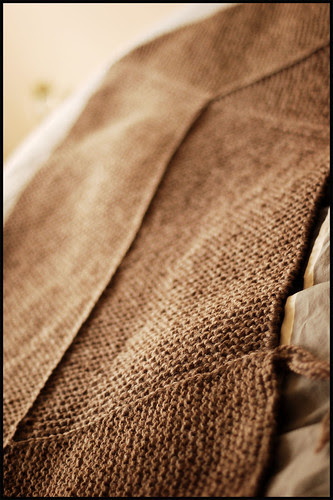 I had to send for more yarn - this thing is a true beast of wool. This is EZ's Garter Stitch Afghan from The Opinionated Knitter - pictured is half of the finished product, seamed together. The pattern is worked in 4 pieces. I'm about a quarter of the way through the fourth and final piece. With chunky yarn held double, I'll be hard pressed to find a warmer blanket than this come winter time.

As for sweater knitting... 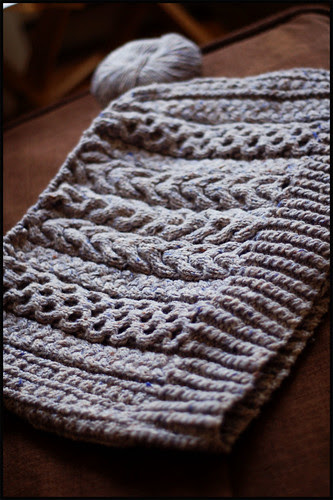 I'm still plugging away on Na Craga, although it is truly slow going. Really, that's no problem - it's rare that I tire from having so much righteous cabel-ry around. I'm ready to start the sleeves, which caused a temporary pause in the process, allowing for a few new projects to wedge their way in. Projects that don't require sleeves. 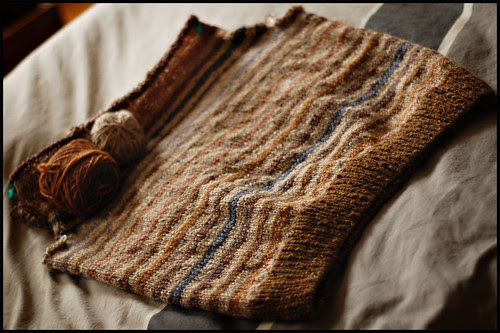 When Vests Attack. I've never been much of a vest fan, but as has happened so many times before, knitting has slowly worn down yet another of my garment prejudices. The other day, I had an all-consuming urge to knit a vest. No idea where it came from, but when the knitting muse comes a-calling, I try not to stand in her way.

The vest sort of fell into place on it's own. I had just finished spinning a bunch of Adrian's beautiful shetland and it was really burning a hole in my stash. I had more than enough for a smaller project, but not enough for a garment. 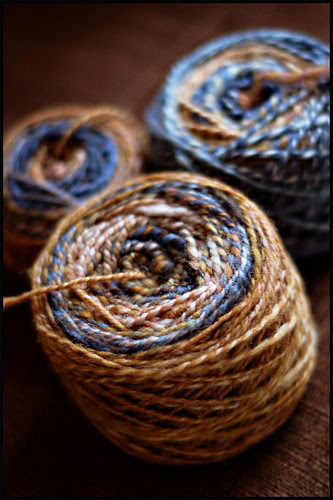 Mere days before, my sister-in-law sent me a thrifted wool tweed sweater from Ireland that she picked up in Portland for a whopping two dollars. As I was harvesting all that glorious Irish wool, I realized the weight was just the same as my shetland handspun. The vest bug bit and everything became dizzyingly clear...

I'm winging the pattern, knitting it in the round with steeked armholes and v-neck opening. And can't put it down. I'm having a blast. You'll see more soon. 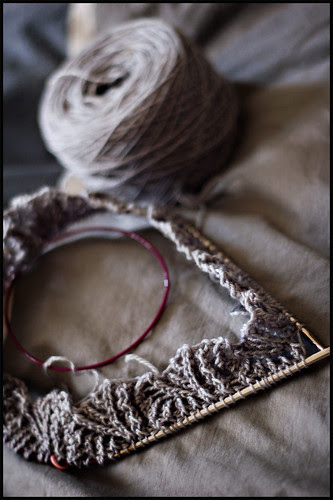 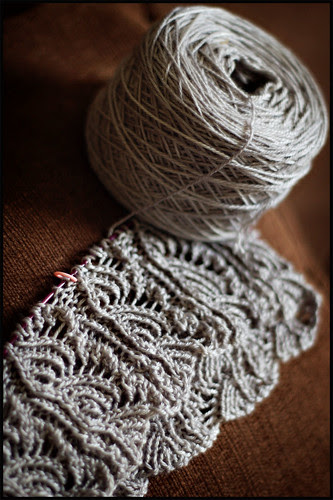 The craziest thing is there are MORE projects. They're everywhere. It's a true case of knitting schizophrenia. I'm all over the place, and while this type of knitting behavior usually puts me on edge, lately I'm thrilled by it.

5.04.2008
BSJ Brigade One of my favorite things to do is watch the number of Baby Surprise Jackets crawl higher and higher into the thousands over on Ravelry. It stands as a testament to the timelessness and genius of this pattern. Whenever I'm finishing one, that annoying Lays Potato Chip slogan always comes into my mind, you know it - betcha can't eat just one? Yeah. Now that I've defiled the glory of EZ by comparing her to greasy snack food, I think we should move onto the knitting. 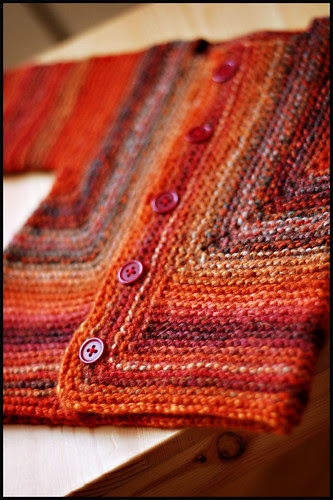 Today is a two for one - two handspun BSJ's - and represents a few things: my new found knitting time with the official end of my semester (glory!), spring cleaning and the finishing of way too many WIPS (I'm taking them down all around me), and what may serve as a good segue back to knitting from all that spinning talk. 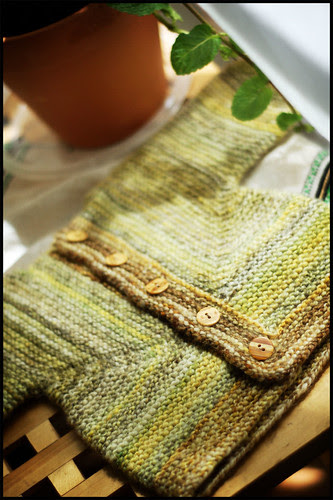 There's not much to say about the pattern that hasn't already been said hundreds of times. If you've knit one, you know. If you haven't, you should. The pattern can be found in Knitting Workshop and The Opinionated Knitter, and is also available as a stand-alone pattern from Schoolhouse Press as well as a DVD walkthrough with Meg Swansen. 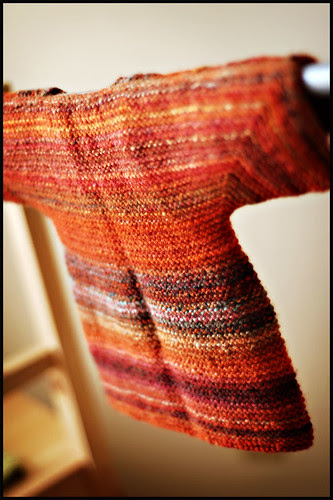 These are BSJ #2 and #3 for me (Fall Version and Spring Version seem more appropriate titles). The first was made last year in early summer, and happened to be the first time I ever officially knit with handspun. Domino effect? 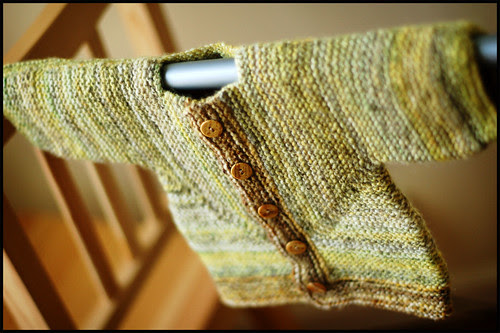 I think this pattern is a great match for handspun yarn - the self-striping nature of handspun accentuates the shaping of the garment and the slightly irregular texture suits garter stitch wonderfully. Not to mention you can knit a whole one using between 4-5 oz of yarn, and spinners usually have a lot of small batches of handspun lying around. They're also great at classing up all your scraps. Very versatile. 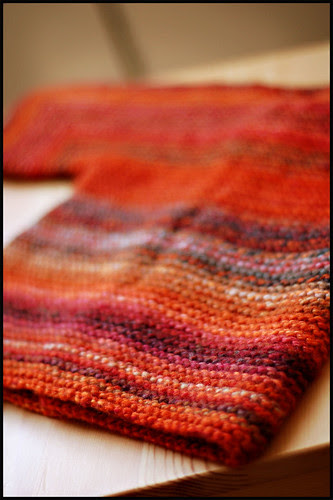 The Autumn (Red/Orange) Version was knit with merino fibers dyed at Spunky Eclectic. The colorway is Burning Bush and came out fantastic - it was a pleasure to both spin and knit. [Solo yarn shot here.] I actually knit this about 9 months ago. I remember because it was my portable knitting during that hellish move in September. I also remember channeling all my desperation for the onset of Fall into it. But alas, it sat completed and without buttons all of these months, until the other one came along and prompted me to get over to the button shop. 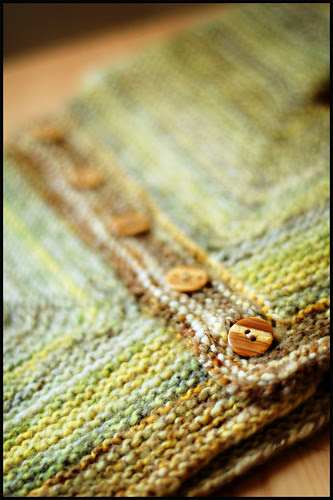 The spring version is fine shetland dyed by Krista at Pigeonroof Studios. I actually ran out of yarn right at the buttonband and subbed in some leftover merino from a previous spin, which also turned out to be Pigeonroof. [Both yarns here and here]. 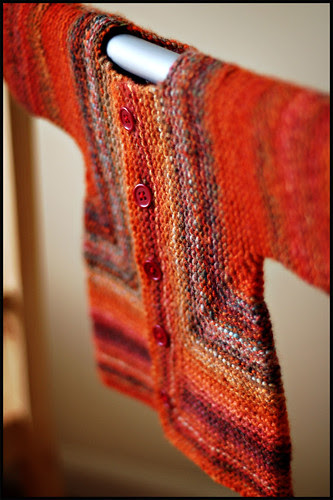 Buttons were purchased at B.E. Yarn in Greenpoint, Brooklyn. Everything was sewn up and photographed a couple of weeks ago. And I think that about exhausts these two for things that I can blather on about. Are you still with me? 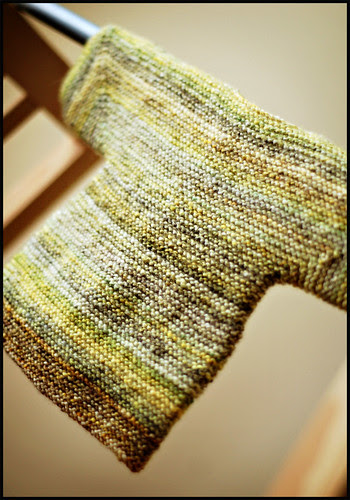 As I said before, my schedule has taken a dramatic change this week, in favor of my knitting. I should have a normal life for a while, which means I can actually check e-mail (crazy, right?), read blogs, and best of all knit. I have a lot of catch-up to do, but things are looking up. Thanks to all of you for sticking with me through this sadly sparse year. Onward and upward.
¶ 12:14 PM 84 comments