b r o o k l y n t w e e d
7.28.2006
Jet Set I'm off for a quick weekend in Chicago. I'd ask for yarn-store advice, but I'll only be there 3 short days. Dont worry Chicago Knitters, I'll be exploiting you for advice in about a month: I'll be spending the last half of August and the first week of September living in your wonderful city!

I needed something last minute for plane/travel knitting tomorrow morning. This seemed, to me, a perfect time to justify breaking into the Yorkshire Tweed DK bag... I've started sweater #3 (a variation of EZ's Seamless Hybrid Sweater), all for the sake of bamboo needles [I realize aluminum/metal needles are now OK for plane trips, but I like to play it safe. If TSA gave me an ultimatum regarding my addi turbos, I probably wouldn't end up on the plane.] 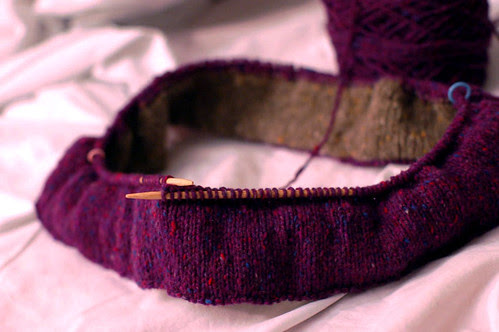 7.24.2006
Forbes Forest (or "Finishing What We Start") I had to check the Tweed Archives to see when it was that I actually started this project. Turns out it was early April. wow. See, its not that this pattern wasn't enjoyable or exciting - it definitely was, especially as scarves are concerned. But I've had some exciting distractions on the side keeping me away from it. the recent heat wave had one plus - it forced me to pull out a small project and work on it. and now i have this. 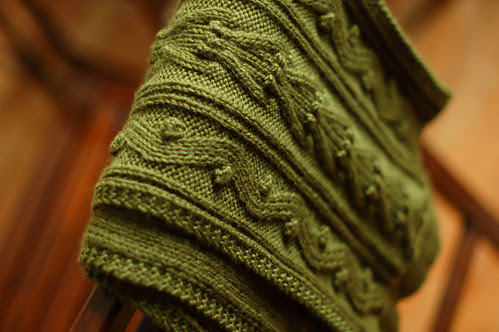 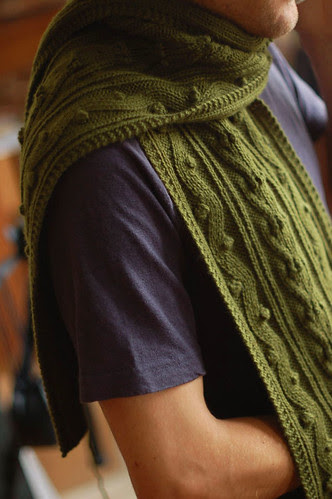 Modifications: added pattern repeats to add length. I used 6 balls of yarn, instead of the recommended 5. The curling was pretty bad, but a wet-block solved the problem. The finished measurements are large, we're probably bordering on 'stole' status here, but it'll keep me nice and warm during the frigid winter months when those inter-skyscraper gusts seem unbearable. 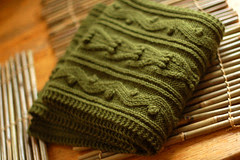 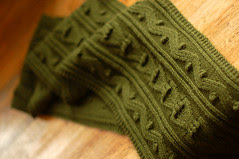 This project, not surprisingly, has been one of my favorites to photograph. The sculptural cabling is indulgent, and you can't argue with that great green. My Work-In-Progress pile is dwindling down to two sweaters and nothing smaller. I'm waiting for that perfect fair-isle or lace project to jump out at me. any time now... come on. i'm waiting.
¶ 9:33 AM 65 comments

7.19.2006
"The Murse" (Man Purse) A couple of months ago, my roommate got this crazy look in his eye as he was fondling an old project of mine. Inspired, he expressed interest in designing and commissioning a small project for me to create for him. The exchange went something like:

Weeks later, after many hours of resolving "creative differences" ... the Murse is complete. 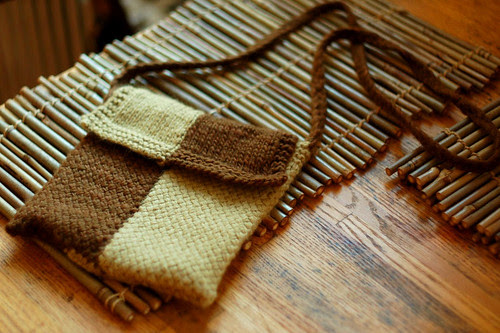 Pattern: The Murse (My Own)(+ a liberal dose of creative input from M)
Materials: Manos Del Uruguay (Brown), and an Unknown Wool/Alpaca blend (Tan) (Yarn band was promptly thrown away upon purchase by said Roommate) 1 ball of each.
Needles: US 6, 8, 9 (Bamboo Straights)
Completed: late June 2006
Measurements: didn't take exact measurements. Its sized to fit a large pair of 'studio' headphones and mp3 player and wallet snugly.
The Strap: A 4-piece braid. I used 4 long strands of Manos held double. Its much less stretchy than a knitted strap, and I like the look. 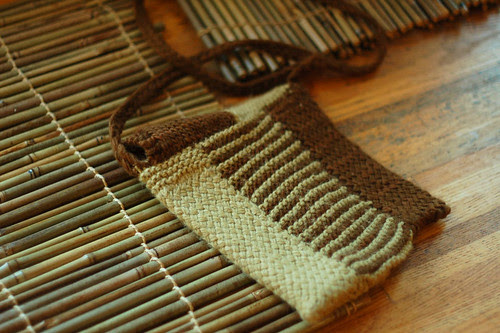 Lessons Learned: Be wary of collaborating on a design project with a non-knitter. In this case, knowing the limitations of the craft is VERY important (even on such a seemingly simple project... you'd be surprised).

Other notes? Basketweave stitch sucks ass and takes forever. Although I can't deny that it looks freakin' awesome when completed. This project did drag on much longer than I anticipated because of this stitch (cable crossing every pair of stitches on every row, RS and WS).

Was it worth it? Of course. You should see how much he adores this thing. Its really entertaining.

Short notes on other things: Sweater progress has been stunted because of the heat. Sweater projects have grown too large to drape over the lap. I'm in search of something small to keep me busy, but not a lot of knitting is happening in general. This should change over the weekend.  ¶ 9:37 AM 56 comments

7.12.2006
Lucky me In the last week, I have received two generous gifts from knitfiends... little did either of them know, it was my birthday Sunday. Ha! Great timing, no?

After seeing this shawl, i was blubbering to kris about that great yarn (laceweight crimson tweed?!). What did she do? She sent me her leftovers! This week a package arrived fresh from Norway, and that color definitely perked me right out of my Monday funk. 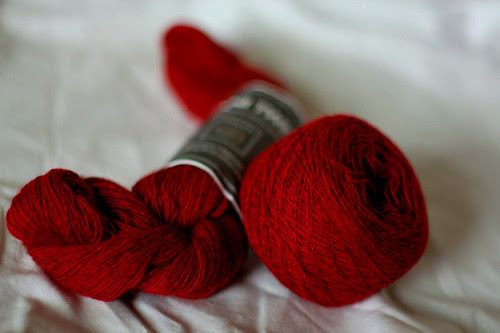 That's Isager Spinni Tweed laceweight wool - 100g skeins with 600 yds a piece. And as easily as that, the lace bug has been resurrected. I'm on the hunt for a good project for this stuff now. Thank you, Kris!

And last week, Lisa sent over the pattern for 'Scott' (Rowan Classic Winter) from Portland. It was just the motivation I needed to go ahead and make the purchase I had been planning for my very own birthday gift (to myself). I am now stocked with a healthy supply of Soft Tweed and looking forward to digging in sometime in the early fall (probably late summer, who am I kidding). 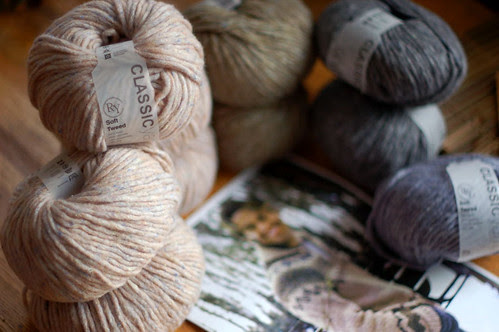 I've been wanting to make this sweater for a looong time, so I'm happy to say that its finally a reality. And, by the way, have you felt Soft Tweed? hehehehehehhhahhah, glorious! its cackle-worthy.

7.07.2006
Progress My long weekend was wonderful. We BBQ-d, spent long nights drinking on our balcony, saw fireworks, took warm midnight walks around Brooklyn, and of course, I got a decent amount of knitting in here and there. It wasn't the marathon-knitting weekend I had planned - the heat-induced laziness has definitely taken its toll - but it was summer-y in every way possible, and I thoroughly enjoyed myself.

I started Demi last week and spent most of my knitting time indulging myself with cables galore. Although, I did finally take the plunge and throw a finished piece of Raspy in the washer for the final test. I am very happy to report that Sleeve #1 emerged from the dryer meeting exactly my planned measurements. Exhibit A: 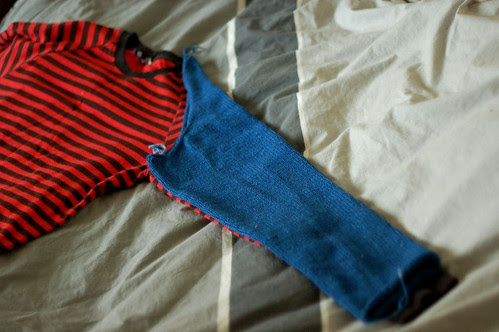 To say I felt smug is an understatement... ha! Talk about satisfaction! The fabric becomes denser after washing, and my only worry is that, because my prototype is a finer weight fabric, the finished Raspy may be a little too thick for my chosen fit. It may not be perfect, but I think it will still be fine. Maybe I should have planned a bit more ease to account for the fabric density, but oh well. I'm sure it will work itself out in the end. I'm still enjoying the fact that it matches the lines/proportions of the prototype perfectly.

And I thought I might as well give you a progress shot of Demi. I can't stop staring and groping it. This isn't a sweater. It's sculpture! This is honestly how I feel - I dont even care if I wear it, I'll just hang it on the wall and admire! 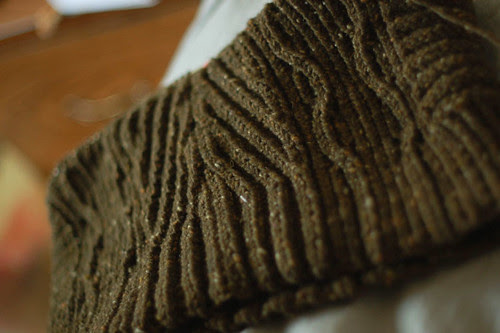 side panel - i love this cable.
Some of you have inquired whether or not I am knitting Demi for myself or for someone else? This one, my friends, is for me. I've changed all the central cable panels (the ones with bobbles) and taken out the waist shaping. Simple changes to the cables, are actually giving the sweater quite a different look. I'm also knitting it in the round [the cable panel you see above is the side of the sweater and will be the panel located under the arm] I'll be changing proportions, mainly body/sleeve length and armhole depth. Adding some nice rustic wooden buttons and I think it'll be a unique piece. But we'll just have to see. Its definitely the thickest and warmest sweater I've ever knit. But as I said before, this one is 100% about the process. And i'm loving working on it. So whatever it turns out to be, I know its worth the time.

I'm spending the day cleaning and organizing, making art and then working on Demi (with constant coffee intake). I have another exciting weekend ahead, but I'll tell you more about that later. Knitters of the world: Godspeed!
¶ 12:17 PM 27 comments