b r o o k l y n t w e e d
9.25.2007
Taking Stock One of the best parts of moving (only in retrospect can I deem this as a positive) is the inevitability of taking stock of all those nasty WIP knits that we so easily find ways of ignoring (hiding from ourselves). In organizing all the stuff that needed to move from one Brooklyn walk-up to another, I tried hard not to shudder as the pile of unfinished knits continued to grow exponentially. One room gets cleaned and 3 more stow-aways rear their ugly heads. Repeat for every room of the apartment.

Sure, despair and hopelessness are the first feelings to descend, but leave it to the great momentum you achieve while moving to blow past those feelings of defeat and move right on to the moving-on.

A frog-fest ensued and I have to say I feel absolutely liberated and excited again about good yarns that had gone long forgotten. The biggest mountain to scale was my old friend Demi. 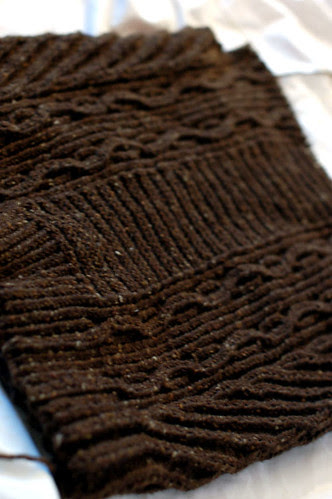 taken july 2006. ugh.
On first consideration, it seemed like there were too many sinuous cables and twisted stitches to ever justify ripping something so beautiful, but in the spirit of being brutally honest with myself about what would and would not be worn... I knew what had to happen.

After trying on the body several times (there was only one sleeve left to complete the thing!), I knew what had to be done.

Too thick. Too warm. Too constricting. These are the things I repeated to myself as the wool carnage ensued. And, my friends, Demi is no more.

Don't be upset - because the best part of the story is yet to come! Almost immediately after the final stitch had been dissolved, I fell in love with the yarn all over again (it wasn't difficult). And it just so happens that I was in desperate need of a new sweater project. Do you see where this is going? Well lets just say that the Yorkshire Tweed and I are taking a second honeymoon, and I haven't looked back since. 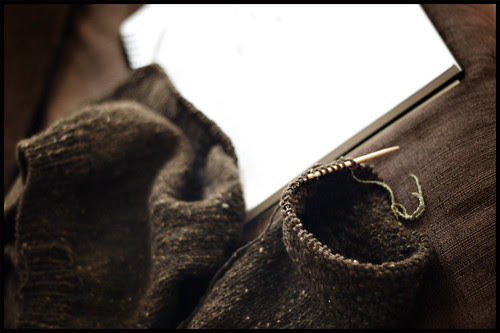 Despite having the busiest schedule I can remember in years, I'm getting a surprising amount of knitting done. Evening knitting has been adopted as the most effective way of relaxing in a short period of time.

What am I trying to say today? I guess that a little frogging goes a long way - and there's no better time of year to do it. Liberate (yourself) some of that gorgeous yarn that has been too-long imprisoned in a doomed project (we all have them) and I promise you'll be justified. I still can't believe I've been sitting on 10 balls of this discontinued wonder-tweed for almost 2 years with no finished sweater to call my own. That's all about to change.

And as for Big Blue, we're rounding the home stretch. 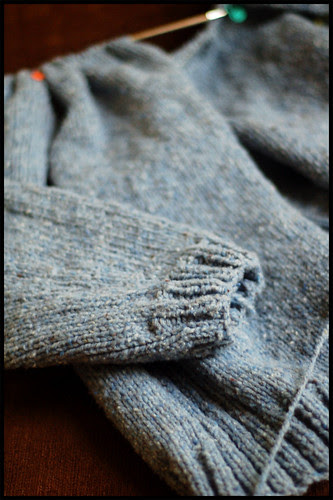 As it turns out, sweaters are everywhere and that's what Fall should be about. Back to my wool-crazed euphoria. Happy Knitting.  ¶ 10:26 AM 55 comments

9.08.2007
Squeaking By Isn't it a bit sad how dependent we are on the internet? I never really notice it until the precious life-blood of blogging is ripped away from me. I won't have any regular access to internet in the new BT headquarters until *next* Saturday, which I'm trying to pretend isn't seriously effecting my daily life.

I've been doing my best to keep up with everything, but I'll warn you now if you send e-mails or comments my way, there may be delays (even longer than usual!). I didn't want to go, however, with yet another week of silence here induced by the absence of any connection to the outside world - so I'm taking another quick opportunity to update you on what's goin' down.

That week-long cold snap at the end of August was such a treat. And such a tease. It was all I needed to get my Fall gears turning. Of course September so far has been relentlessly hot and humid and I'm feeling a bit of remorse for letting myself indulge in that early Autumnal preview. Either way, I started the first of hopefully several Fall Sweaters and I'm not ashamed of that. 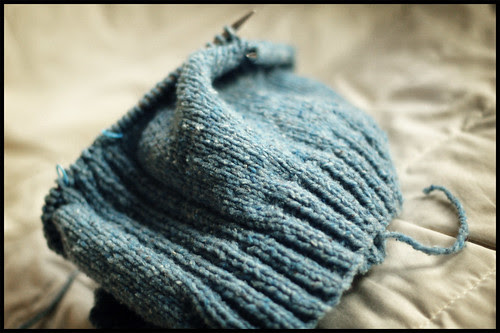 It's a seamless cardigan in one of my favorite tweeds (the same I used for this - it's definitely good enough for multiple sweater projects) that I'm designing as I go. It's a beautiful yarn, isn't it? 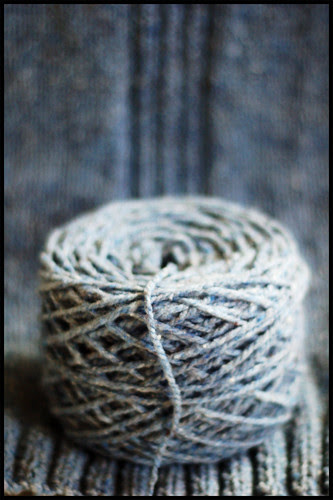 I've also been collecting sufficient stock for the spinning machine to keep a-whirrin' through the season. The most recent acquisition looks a bit like frosting to me, but maybe that's the sleep deprivation talking. 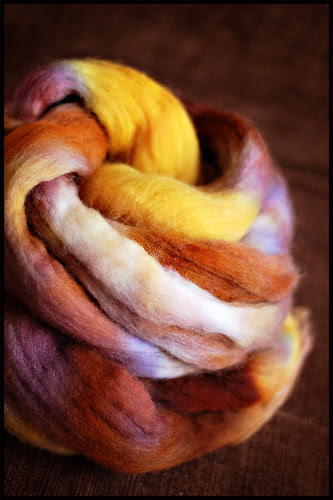 I don't think I've mentioned it earlier, but I am officially a full-time student again. I started a 2 year MFA program this past week. To say I'm overwhelmed is a bit of an understatement, but it's all very good. And I'm keeping my fingers (and toes) crossed that I'll be able to keep knitting as much as my sanity requires. Which is a lot.

The BSJ is done and just needs buttons. More to come on that in the near future.

9.01.2007
A Quick Pop-In Hey everybody! I'm just peeking my head around from a huge pile of boxes for a quick update. We've spent the last week moving from one Brooklyn walk-up to another, in the late August heat. Oy, what a week. I'm happy to report, though, that everything (including every last bit of wool) has made the journey safely - now there's just the matter of unpacking, which is actually the fun part.

Knitting has been almost non-existent for obvious reasons, but I did grab a skein of my handspun to cast on for a small project to keep around for sanity's sake. 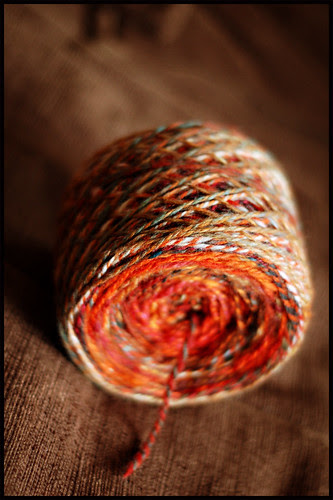 This is 4 oz of pure merino from Amy over at Spunky Eclectic that I spun up to be a worsted weight 2-ply. I prepared the fibers so that it would be self-striping. I love how the colors go together. 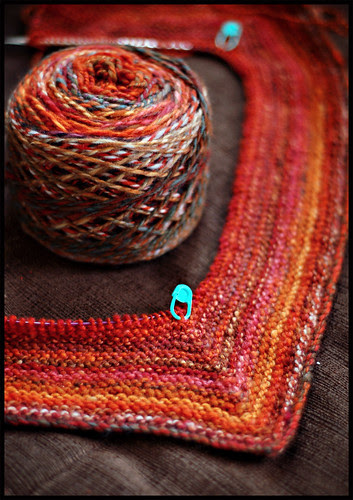 I've really had BSJ on the brain and when the finished yarn came off the wheel I knew these two were destined for each other. I'm hoping I can squeeze one full baby surprise out of this skein. We'll have to wait and see. In the meantime, I'm enjoying every stitch. Limited couch space and all. 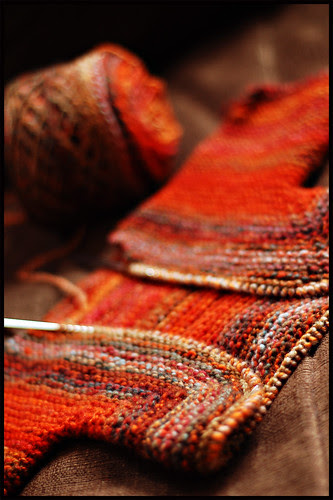 In other BT-related news, a knit-a-long has been started up for the Hemlock Ring Blanket. I've been absolutely overwhelmed at the response to this project, I'm glad to see so many wool flowers blooming all over the world already. If you'd like to join the KAL, visit the start page here and sign up. If you've been thinking about starting one of your own, I'm sure this will give you just inspiration (temptation) you need.

Sorry to drop by for such a short time - I hope to be back to regularly scheduled programming very soon. Enjoy the long weekend!
¶ 12:42 PM 41 comments