b r o o k l y n t w e e d
1.29.2007
Back in Business I'm back in the states and have a whooole lot of catching up to do today. (Bloglines this morning? Ouch). Ireland was wonderful, as you would expect, despite having what I deem a gravely ironic deficiency of wool (at least available for hand knitters). To my surprise (and maybe yours too), I came back empty handed. It's probably better that way after all.

In Brooklyn, knitting is back with a fierce vengeance, I'm happy to report. I'm swimming in a sea of stockinette sweaters and decided to start something to satisfy my detail-oriented, cable-happy side. 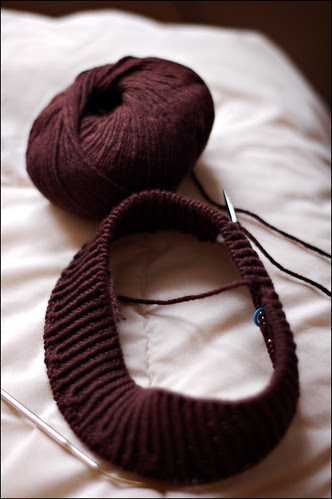 Do you recognize it? This is the humble beginning of my new-and-improved Shedir. I completed my first one more than a year ago and gifted it to my bro for Christmas 2005. Since that was 13 months ago and I'm still thinking about the pattern, I thought it best to start another. I'm not one for repeating patterns, but never say never I guess (especially with a design this clever. And this beautiful).

I'm making some significant changes to the original, learning my lessons from the last time - so it isn't an exact copy (the color, however, is. It's the best one in Calmer's palette. And if the shoe fits...) Speaking of this particular yarn, it took a Tubular-Cast On beautifully.

I'll be trying to clean out my inbox today. Thanks for sticking around for the duration of my little winter getaway. I'll leave you with one of my favorite shots from Dublin: 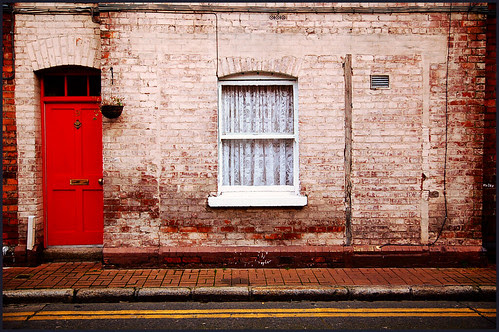 Happy Knitting!
P.S. We've got snow on the ground in Brooklyn, and not an unhealthy amount. Finally!
¶ 9:50 AM 57 comments 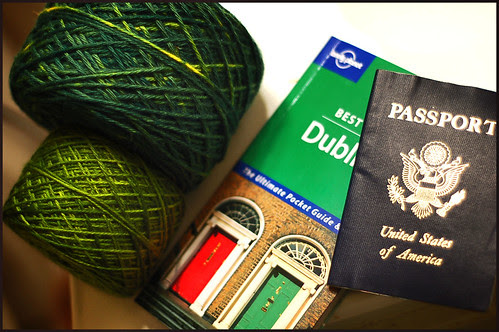 1.16.2007
Striped Sock You all know I'm not a big fan of sock knitting. This I'm sure seems like blasphemy to the lot of you. I've tried, really, to break through to the other side. I've completed two pairs, and started a good number of others. It just never sticks. And that whole second sock thing? Impossible.

So today I bring you yet another attempt to get on-board this ship. One lonely sock which I'm sorry to say will remain alone. I don't plan on making another. My excuse is that I need more yarn and the color I need is sold out. You should know, however, I only discovered this after deciding already to cap this project prematurely. After all, one sock is enough to take some nice photos... so I don't feel like it's a complete bust. 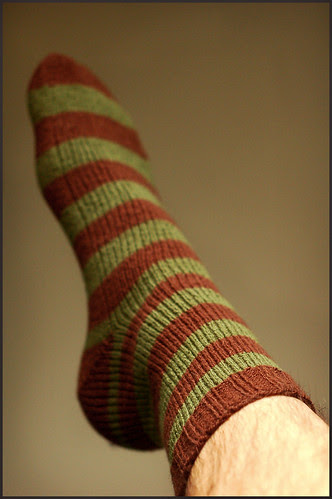 Pattern: My own patchwork of internet techniques
Details: Toe-Up with Magic Cast-On (Love this) and short row heel using yarn over method
Materials: Elann Esprit in Tarragon #5345 (Green) & Brown (Sold Out)
Needles: US 2's and US 3's (for ribbing) 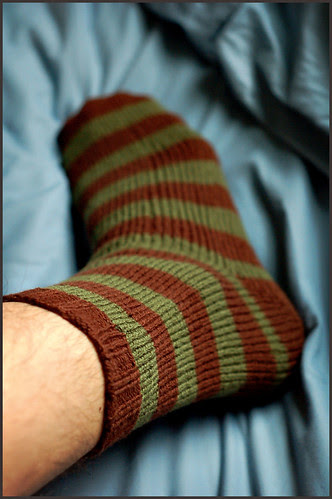 I was excited to try a sock yarn that had elastic in it. I thought I would like it because the composition closely resembles that of most of the store-bought socks I wear. How can you go wrong with cotton that does have memory? Well, I won't say I was disappointed, but I wasn't in love. The cotton is spun in a way that feels, for lack of a better word, crunchy. I definitely didn't have the tactile 'cant-put-you-down' relationship I usually have with my projects. I hear the resounding "told-ya-so's" echoing from my wool closet. How many times must I test the golden rule? WOOL IS ALL.

I also think knitting a sock for US Mens 12 loses some of its appeal. 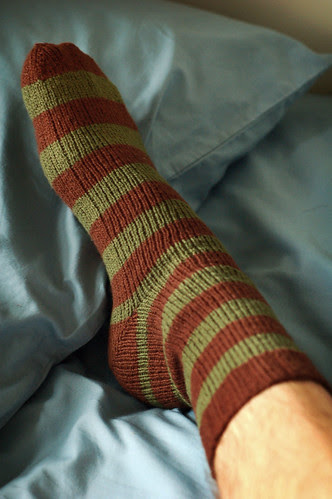 I do like how it looks in the pictures. Unfortunately, I can't wear photographs. Oh if only.
¶ 9:56 AM 52 comments 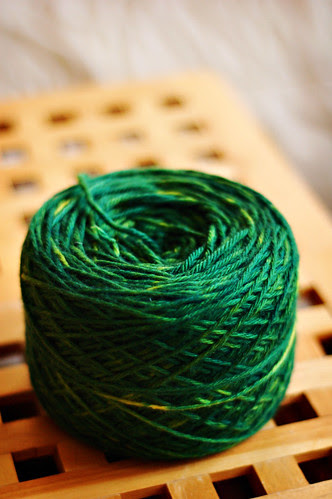 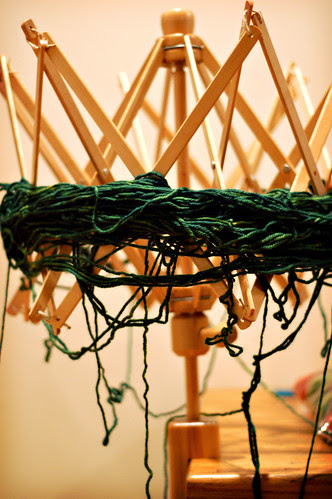 This tangled mess was eventually sorted out. I will not tell you how long it took, nor will I repeat the many colorful expletives that were flying freely from my flailing person.

Enjoy your weekend and be careful with those craaazy hanks of yarn.

[Disclaimer: The above pictured entanglement reflects in no way on the yarn distributor, vendor, or even the Postal Service (although I'd love to blame them). That was aaaaall me. Heh.]
¶ 1:39 PM 55 comments 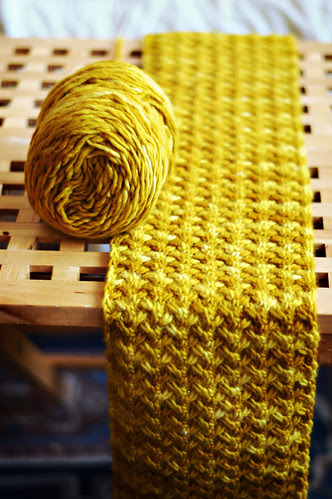 I think the cable count is reaching into the thousands... and that's great! Shifting Sands measures somewhere around 4 feet presently and is slated for just over 6. Over the holidays, this was the project I worked on when I was sick of shaping/counting/pattern writing, etc. or at least the knitting I worked on when I was too full of holiday grub to think about anything else. I probably won't add fringe but will need to come up with something creative to cure the curl at each end (I have one idea that may work).

[if continued exposure to photos of 'Shifting Sands' has finally made you cave, the pattern is located here]
¶ 9:33 AM 43 comments

1.08.2007
The Scholar Collar and Other Ramblings The holidays came and went. My house saw a whole lot of knitting - which may come as a shock to you since all you've heard from me in the last two weeks is a whole lot of nothing. Rest assured, I'm semi-refueled, at least for the time being.

* The huge red blob? Turned into something wonderful. You'll have to trust me on this one cause I can't show you for a while.

* Shifting Sands grew in a crazy way. Not done, of course, but I'll show you an updated photo later this week.

As for Christmas knits, they were basically non-existent this year. And that felt great. I gifted the Swallowtail Shawl that I finished in August (to the most grateful recipient. Most deserved indeed). I felt fine leaving it in worthy hands.

The only other Christmas knit was a collaboration between Luigi and I - the creative vision was all his. All I did was round up the good fibers, buttons and ... the garter. 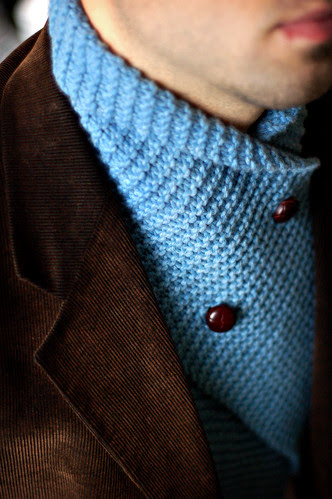 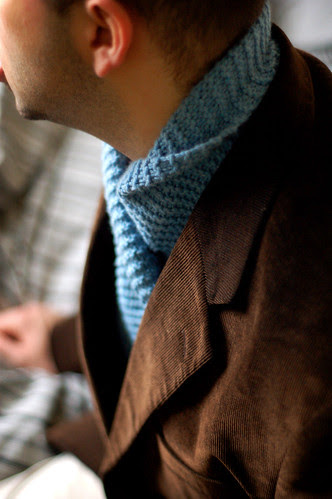 Thoughts: The project seems almost too simple to write about. A rectangle with two buttonholes thrown in and some cool buttons. Form and function are both about as straight-forward as possible. It's clear that the yarn choice is this one's claim to fame. The Cashmere Merino Blend (50/50) from School Products is, hands-down, an all-time favorite for me. Its also one of SP's most popular sellers. The price is borderline criminal (in a good way)(for a bulky cashmere blend) and the color options leave you inspired... rather than the more common "okay the yarn is cheap and nice... but the colors suck. What could I possibly get by making with one of these options that doesn't look absolutely ridiculous..."

It's also true that I love garter stitch. It hasn't always been this way, though, and I'm sure my Zimmermann obsession has heavily tempered this preference over the years. 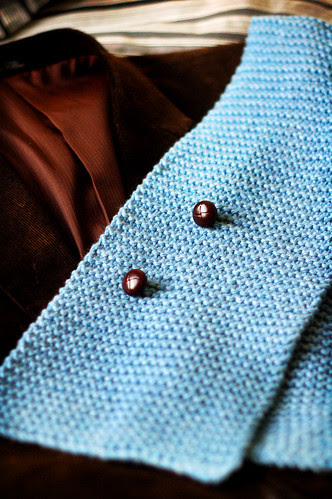 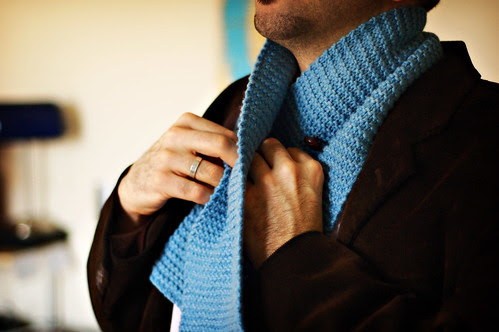 now with real buttoning action!
There should be more activity occurring around here, at least relatively. I'll tell you now, January will be a rough and busy month for me, but I'll do my best to keep up some fiber flow around here. Happy 2007.