julie teaches 6th grade language arts, but also teaches gender studies to her students! I was an avid gender studies buff in college and was blown away when i heard that she was discussing some complex and important gender topics with her 6th graders! can you imagine what an impact gender studies would have on our society-at-large if we included it in our education system as a requirement?

how does this relate to knitting? well let me tell you - earlier in the year Julie taught her students how to knit, and the response was overwhelming from both her male and female pupils (not surprisingly). At the present time, she has an afternoon knitting class for her students that has 32+ members. She has had to ask for additional teacher assistance to help her with the growing class size, and unfortunately had to bar other grades from joining (temporarily) because the group was getting too large (although, there are plans for a younger group to begin next year...). her students, like all knitters, seem ravenous to learn new techniques and take in all the addicting aspects of our art.

not surprisingly, some her male knitting students (some of whom seem very prolific already!) have run into opposition from friends and parents (specifiaclly fathers), who are uncomfortable with males taking such an avid interest in a traditionally 'female hobby.' Well, of course we had to do something about that........

Julie asked me if i would be available for an informal interview from some of her aspiring male students, and of course I jumped at the opportunity!

She has blogged their interview letter and attached my response over at fricknits - I think its really wonderful to see these young active minds latching onto, what i think (and i'm sure you agree) is an important and meaningful art form.

I encourage you to check out THE WHOLE EXCHANGE. Its sure to be a feel good moment for all knitters who are reading, and also, you'll get a little peak into my own knitting history. Just a little... heh.

and because this made my day - here is a picture of her students showing their love for the fiber: 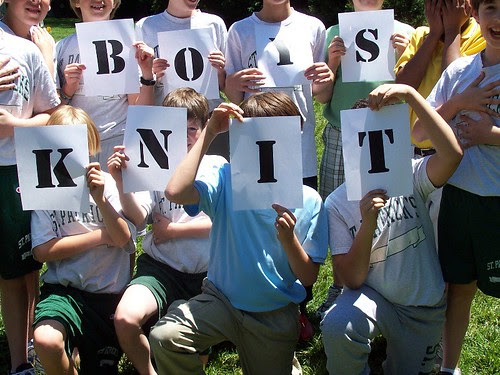 this is a big THANK YOU to Julie for pushing the envelope in her teaching and giving her students a terribly valuable and empowering life lesson. I wish she had been my teacher!  ¶ 11:40 AM

Comments:
this is fantastic! i'm glad to see young minds taking on such a creative art form (as it IS creative AND art.. and don't we all know it!) i was just telling a coworker the other day about these sorts of activities for young kids and i can't wait to forward it on to friends who have always doubted that knitting is for everyone, boys and girls alike.

spajonas : 26 May, 2006 12:32
That is sooo awesome! I wish people would break out of the box and traditional gender stereotypes and roles. Thanks for sharing!

Anonymous : 26 May, 2006 12:36
That's awesome. I taught my last boyfriend to knit, and he really took to it. I was so proud of him, not only for knitting but for breaking those exact sterotypes.

The latest guy I'm dating and I were talking about knitting just a few weeks ago, and he made a comment about how men don't knit. I promptly told him he was wrong, not only do men knit, but straight men knit as well!

I hope those boys stick with it and I think it's great that you answered their questions and gave them the encouragement to continue despite the comments and hard times they might get from people they encounter while knitting.

Midnight Purls : 26 May, 2006 12:52
Your response to the knitting boys was awesome. I hope they all keep knitting. I think it would be great if more guys were knitters!

Anonymous : 26 May, 2006 12:55
That's just beyond fabulous. I wish I had been able to knit in school. Your answers were wonderful and I hope those boys continue to experience the wonderful world of knitting.

Not that he's shown an interest in knitting yet. But when he does, I've got the needles ready.

Thanks so much for sharing this.

Vicki Knitorious : 26 May, 2006 13:12
Jared,
Thank you so much for sharing the link to Julie's post. The boys wrote a great letter and your response was awesome. I completely agree with your statement that people who think men shouldn't knit are confronting their own ideas of gender roles.

Kristy : 26 May, 2006 13:37
That is such a great story and even though I don't personally know you, I felt so proud when I read the whole thing. As if it were a close friend of mine that had done something very cool and inspiring and I could say: "Yeah , yeah...I know that guy. He's awesome".

Thank you for sharing your story with us.

I think everybody should knit because it is so darn cool!

LisaB : 26 May, 2006 19:03
Man, that is awesome! I'm actually headed to Ohio this weekend to hang out my brother and another XY knitter! The 3 of us are going to sit around the bonfire and grill and knit up a Storm!

I must say your letter to the guys was fantastic! It's improtant to help kids get involved in the arts of all kinds and it's hardest for boys. ....right-on "man"!!!!!

Anonymous : 26 May, 2006 21:25
that's awesome that julia is teaching kids to knit. gender roles are created and reinforced at an early age (stop with all the pink toys already!) and i think it's great to teach kids to do what they enjoy. and your letter to the kids was very cool. thanks for sharing.

second, you give me hope for my boyfriend. haha. I guess you hear that a lot, being a guy who knits. but I point out your posts to him all the time, like "look! look @ all the great things he's knitting..and he's a guy!" I don't think he's convinced yet..

anyway, what a great blog and beautiful work you do! just wanted to say hello!

KnittenKnots : 29 May, 2006 14:34
This was such an inspiring story. Kudos to you and Julie for working with the next generation of knitters!

Anonymous : 29 May, 2006 15:30
I think that is fantastic that you're friend Julie is doing what she's doing. I went over and read your response to their questions and think you had some great things to say. I hope my boys have such role models when they are older.

When I was in 4th grade, our whole class decided to work on a charity scarf-making project. Every boy in the class learned to knit or crochet, and it was amazing to see all these little "tough-guys" being so crafty. Even at the time I remember thinking it was really cool.