b r o o k l y n t w e e d
12.24.2007
Big Blue I'm happy to finally share my most recent "real" sweater project with you. I've been knitting lace and other smaller woolies for so long that I'm getting pretty starved for sweater knitting. I'm devoting the rest of my vacation time to the Pi shawl but back in Brooklyn sweaters are gonna be back on center stage. 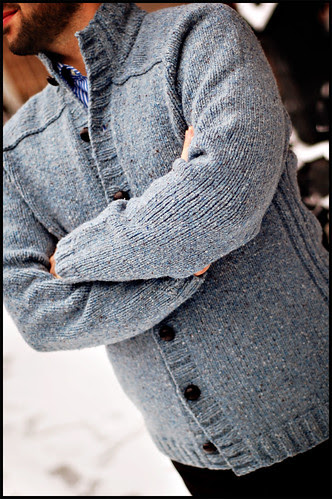 This sweater was a collaboration between knitter and recipient - we merged ideas and I imposed my Seamless tendencies on all possibilities that were presented. I knit the majority of this beast in the Fall but didn't get around to choosing buttons (and sewing them on, my least favorite part of any cardigan) until a few weeks back. Brooklyn's first snowfall prompted the photoshoot and the sweater has been in regular rotation for a few weeks already. 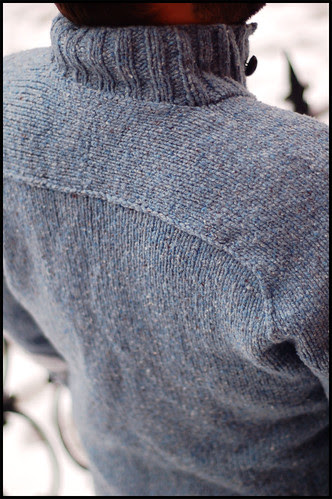 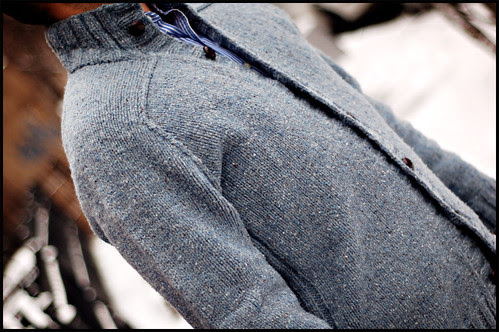 About the Pattern: The sweater is a cardigan knit in the round, back and forth (yes, I purled) with a shirt yoke (one of two seamless hybrid variations) a la Elizabeth Zimmermann. The yoke is my favorite part of the sweater - I wasn't sure how it would work out with a chunky yarn, but it turned out just right. I've yet to find a pair of shoulders that this style of yoke doesn't suit wonderfully. My first one is a fit-superstar in my sweater collection. I still marvel at how those shoulder stitches travel horizontally across the body - amazing! 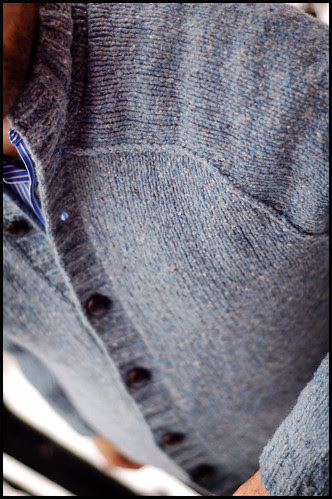 The collar and button band were knit last, after body, sleeves and yoke. I picked up stitches around the collar opening and knitted straight for a few inches for the stand-up collar and the picked up and worked the buttonband in a 2x2 rib to finish everything off. For anyone thinking about a vertical ribbed buttonband, I love how it turned out - and don't judge it until you block it, it will behave very nicely for you. I extended the 2x2 ribbing up the underarms to make the sweater a bit more fitted for the body type. It also adds a nice little design detail. 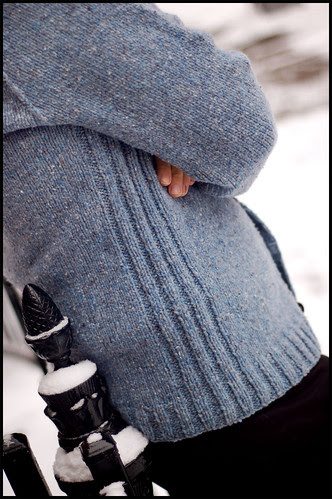 As for the yarn, I know I've said it before but this is one of my favorites - probably one of the best values out there. It's the same stuff I knit my Tomten out of earlier this year and I'll tell ya - it wears just as nice as it knits. Not only is there color palette unmatched for nature-tone lovers, but the yardage alone is unbelievable. For a thicker yarn, you won't believe how light it feels. It blocks beautifully and can take some serious real-world wear and tear. Yes, Beaverslide has a big fat BT stamp of approval for anyone who is considering it. 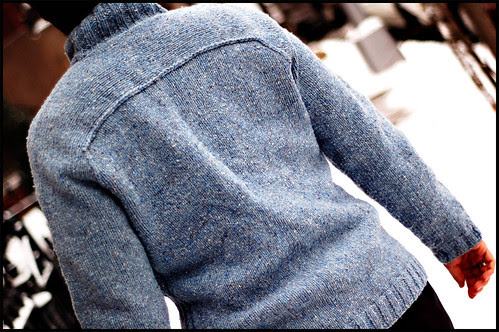 All told, I'm very happy with how it turned out - and it always sweetens the deal when you see a non-knitter wearing a handknit on a regular basis. As I mentioned before, revisiting this project has sparked my interest in going back for round 2 on any one of my multiple half-knit sweaters. Unfortunately they're all about 3000 miles away. I'll have to settle for lace and colorwork for another week... nothing to complain about I suppose.

Hope everyone is warm and relaxed with knitting nearby. Don't feel bad about wrapping up an unfinished knit tomorrow morning - it still means a lot! Merry Christmas to all.
¶ 12:44 PM 140 comments

12.22.2007
Koolhaas Online Release Writing from Brooklyntweed HQ: Washington with a quick bit of news. Thanks to a whole lot of e-mails from you all, Interweave has released the Koolhaas pattern in their online store. If you're in dire need of a last minute Christmas knit, or just want to knit something for yourself on Christmas - have at it! 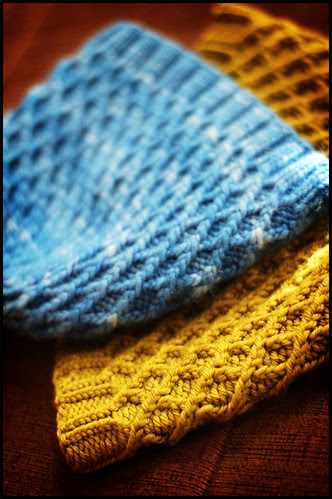 The pattern is available here and can be knit with any worsted weight yarn (wool is best). I want to say thanks again for all the support and requests for the pattern, it really means a lot! 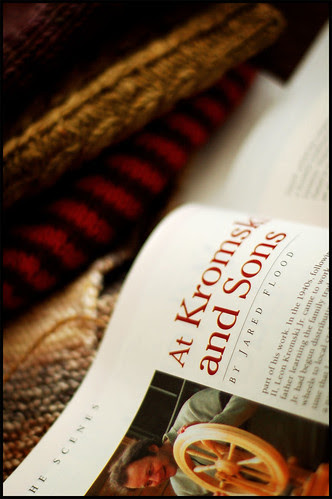 In other news: Spin-Off readers, I wrote a feature article in this month's issue profiling the Kromski family and their story. It was a great experience and also turned out to be a great issue. I saved it for the airplane - it kept me entertained while breaking from plane knitting.

Sweater tomorrow - hope you're all settled in for the holidays!
¶ 8:50 PM 38 comments

12.16.2007
The Ribwarmer Here's a Christmas present that was given early to my mom when she was visiting after Thanksgiving. New York is colder than Washington state, so we both agreed it was a good choice for early gifting.

It's another classic Elizabeth Zimmermann pattern to add to the ever-growing collection I've started. 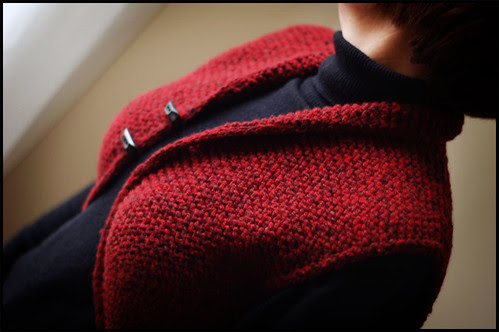 Started and Finished: Late last summer (planning ahead is rare, but awesome) 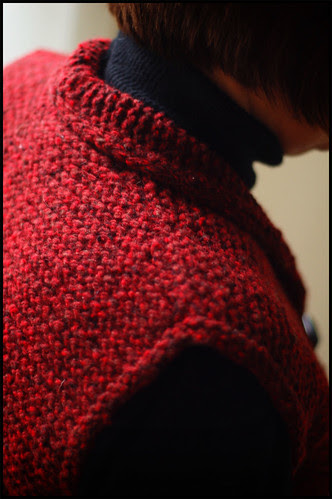 Modifications: The original pattern is written for worsted weight but I really had my heart set on using this chunky red tweed that I had in my stash. I did some pretty simple calculations to change the counts for a thicker yarn although in retrospect I think the vest would be pretty nice as-written with a chunkier yarn. My mom is a tiny little woman so this fit her perfectly, but I don't think the modifications made a huge difference for the intended size since the chunky yarn needs more ease than worsted anyway. 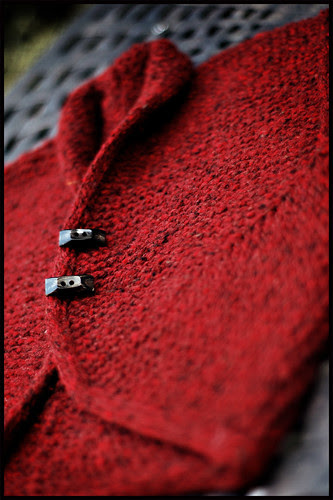 I trimmed the whole thing with I-cord and tried invisible I-cord buttonholes a la EZ which are really fun. The vest is knit in two pieces - the right side and left side (this was the predecessor of Elizabeth's "Rorschach Sweater") and seamed up the back after knitting (see picture below). All shaping is done using short-row-style mitered corners and as usual its all garter stitch, which means no purls allowed. 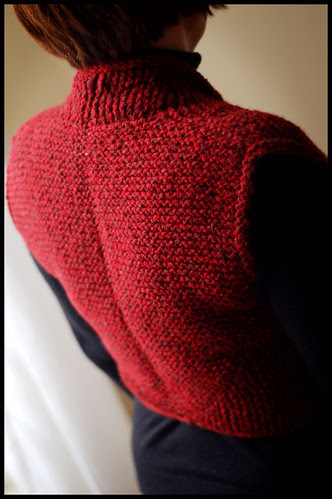 This is a quick knit - great for gifts if you've already exhausted someone with hats or scarves over the years. Also, this piece technically fits in the sweater category... so you'll get extra brownie points for that. In true EZ fashion the pattern is so clever that it's sure to keep you interested all the way through, even on a deadline. 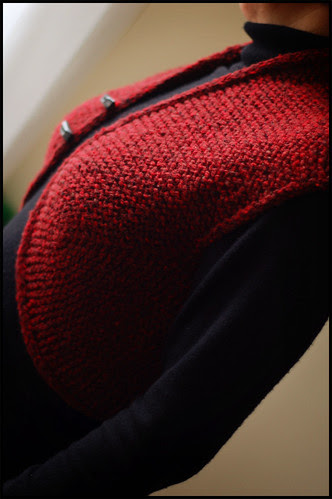 I have three days of trials left and then we're hopping on a plane and flying far far away from The Big Apple. Here's wishing you minimal stress over the next 10 days. I'm shooting to have one more sweater for you before Christmas - stay tuned!
¶ 1:08 PM 65 comments

12.07.2007
Christmas Fiddle-Faddle I've done a bit of Christmas knitting here and there between the Pi and waiting on more yarn for my Garter Stitch Blanket (that thing is a ravenous yarnivore). The first is an annual tradition - sweater ornaments. 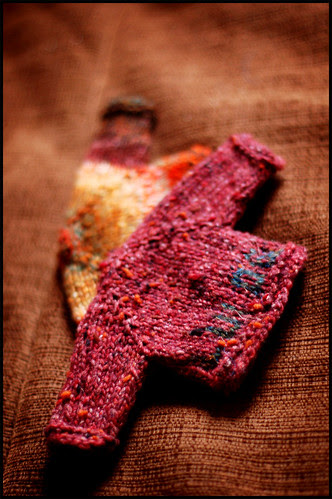 I knit one each year - it's a slow but steady way of sprucing up a knitter's tree without them becoming a nuisance on your knitting list. My mom visited for a few days after Thanksgiving and knit one too, so this year we had a bonus alpaca ornament for tree-trimming (not pictured above).

These are knit top-down on double-pointed needles. I usually use a DK or worsted weight on US 3 or 4's. I cast on 12 stitches, work two ridges of garter stitch and start increasing at four raglan points until it looks about big enough. Knit down on body and sleeves (I decreased a bit on the sleeve) and work the cuffs when it feels right. They're very improvisational which is what makes them fun. They take under three hours to work and are perfect for all those little bits we compulsively save (knowing they'll probably never be touched again). They're great for a little hit of colorwork, lace, cables, stripes, handspun, or any other poison you might be craving at the moment but can't justify in any other way.

I also finished the third installment of Koolhaas this week. I think this version wins the stitch-definition contest. 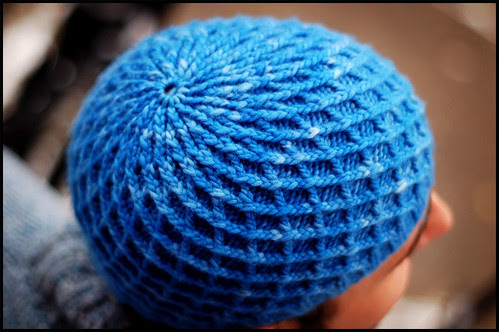 The pattern is mine, available in the Holiday Gifts issue from Interweave if you'd like to knit it. For this one I used Malabrigo Pure Worsted Merino in "Continental Blue" on US 6 and US 7 needles.

The Malabrigo is, as always, uncannily soft and light. One thing I'll note here is that it seems to be a bit less generous in the row gauge department, so if you're trying to decide how many repeats to work for your head length, go with more rather than less if using this yarn. Number Three is a tad short but still fits the recipient. I might extend the ribbing a bit if it persists being bothersome.

Finally, since it's Friday, I'll leave you with a little handspun hit. This is a 2-ply merino heather from Copperpot Woolies, aptly named "Hot Rocks." This was spun from a batt of deep reds, oranges and bright yellows. See the unspun fiber here. 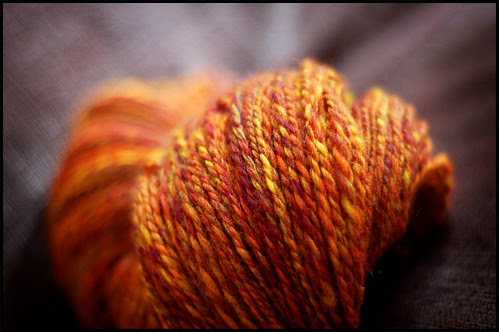 Unfortunately I won't be doing much spinning over the next two weeks. The final stretch of the semester isn't shaping up to be too kind to my knitting and spinning (The Minstrel is sitting in the corner, yarnless and pouting already). Good thing for you I've got two finished sweaters to write about (already photographed!) for which I'm very excited. We're not going to let school choas ruin holiday-blog-fun-time. Not on my watch.