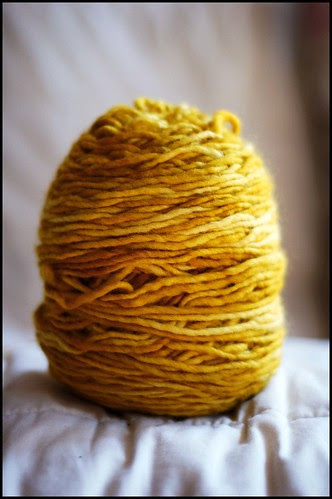 I'm endlessly captivated in watching the form of a hefty yarn cake change as you work with it (WARNING: former-art-student-gone-yarn-nerd alert!). There's something seductively sculptural about Malabrigo - it must be the subtle thick and thin single combined with the all that saturation and color depth.

Elena : 16 March, 2007 11:18
I haven't commented before but I just had to say I completely relate to your feelings on this yarn photo! It makes me want to pick up my pencil and start drawing it---the texture, the lines... ahhh! I guess I'm another former art school nerd, too... Great photos BTW!

Berlinswhimsy : 16 March, 2007 11:23
You're so right about Malbrigo--it does have a sculptural quality and it's incredibly seductive.

Anonymous : 16 March, 2007 11:29
I'll never get sick of looking at pictures of Malabrigo, especially this colorway.

Anonymous : 16 March, 2007 11:34
I owe my obsession for this specific gold in Malabrigo to you. I thought I was almost over it until you posted this picture again! The problem is I can't wear this yellow, being of Asian descent, and if I knit something with it, I would hate to give it away. So it's sitting in my "stash to be paid for" at the lys where I work, until I can decide or bite the bullet.

And I love to see how the yarn cake slowly transforms into a yarn beehive (at least that's what I see) as you use it.

sarahcee : 16 March, 2007 12:50
It's gorgeous, no matter how you look at it. I've never worked with Malabrigo although I have pawed it incessantly at yarn stores.

Anonymous : 16 March, 2007 15:01
you get so many comments...i'm not surprised though, not only is your work classy but your photos are stunning....love this beehive!

Unknown : 16 March, 2007 17:22
I'm knitting a hat with Malabrigo right now, and I'm surprised this stuff is not considered a controlled substance. So soft, such incredible colors (mine is 'sealing wax'--lots of rose-pink and coppery brown. To die for.)

Yours is marvelous too! It looks like the singles on Rumplestiltskin's bobbin.

Beth S. : 16 March, 2007 19:11
I can wait no longer...Please tell me what camera you use! Every one of your photos is absolutely perfect. (I'm feeling a bit ambivalent about my own camera these days...) Thanks for Malabrigo Friday!

Hannah Six : 16 March, 2007 22:23
I feel like such an overall nerd for saying thing, but I've been reading your blog for a few weeks and I absolutely LOVE your yarn pictures. I use them as my desktop backgrounds because they're so beautiful (and I heart yarn).

Thank you so much for ANOTHER potential desktop background. I love love love what you knit. I hope all is well and thank you for such a great blog to read.

But it does make me green with envy. On my last trip to NYC I searched high and low for some elusive Malabrigo and came back empty handed (well... not empty handed, but no Malabrigo anyways) And of course none of my LYS carry it.

It's the snuffle-upagus of the yarn world.

Anonymous : 18 March, 2007 15:19
glad to see someone else is as obsessed with malabrigo as i am! i'm wondering where you buy your malabrigo in nyc...i found it in knit ny, but they haven't gotten more, so i've had to resort to buying it online, which is cheaper, but less instantly gratifying...

i just found your blog and am so glad i did! your knitting is amazing and inspiring!