b r o o k l y n t w e e d
4.04.2006
the spoils of the weekend saturday my big elann package came and i was finally able to start the urban aran i've been itching to knit. i didn't get a whole lot of knitting time in this weekend because the weather was un-REAL and i had to get outside and enjoy it. i guess i could have brought my knitting to prospect park, but it probably would have distracted from all the laying-in-the-sun-doing-nothing-but-enjoying-the-warmth-on-skin that was happening.

the great thing about working with chunky weight yarn? even the most modest amount of weekend knitting time results in large chunks of completed sweater pieces. as of last night i'm already up to the armhole shaping. this is the back panel of the sweater. the front piece is patterned the same, although i'm splitting it into two pieces and adding a zipper to make this the 'urban cardigan.' 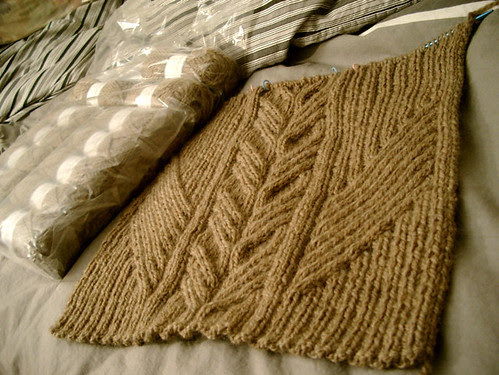 i'll probably finish this sweater when the excruciating summer humidity is just starting to set in. not the best planning on my part, but hey, what're you gonna do? summer goal is to beef up my sweater collection anyway (for the fall), so this can be the start of that process i guess.   ¶ 9:21 AM

Comments:
it looks beautiful so far.

don't worry, Ill be knitting nice and warm wool in the humidity as well since I have the same goal

yahaira : 04 April, 2006 09:55
Looks like you'll be done way before summer. Seriously, if you almost finished the back on a sunny weekend, give it a couple of rainy weekeneds and voila!
Awesome pattern by the way.

The color very nice and I love the cardigan idea.

Don't worry, I'll be knitting some woolies this summer too. Gotta reduce the stash, plus cotton is such a pain to knit with...

Anonymous : 04 April, 2006 19:42
Looks really good. A few more days like today, though, and you could be wearing it earlier than expected. It was a fabulous weekend though.

Anonymous : 04 April, 2006 20:40
Thanks to the return of winter it looks like you may be able to wear that sweater after all! That yarn looks amazing - what kind is it?

KnittenKnots : 06 April, 2006 16:01
i started that same sweater a couple weeks ago! But then promptly abandoned it when it started getting to the 80s (eww) I was making mine a cardi too :D

I purchased the RYC Soft Tweed online through The Knitting Garden. Sometimes they have sales, which make buying the Rowan a little less painful!

Liz : 23 April, 2006 10:58
Beautiful job, great zipper technique. I just started my own Urban Aran cardigan, and I had a question about your selvedge stitches for the zipper. Are they in stockingette?
Cheers
Summer