b r o o k l y n t w e e d
4.15.2010
Made (Over) in Brooklyn: PDF Downloads Now Available I've spent a lot of time over the last two months giving the patterns in Made in Brooklyn a complete make over for their release as individual PDF downloads. I'm very happy with the result, and even happier to announce that they are all now available both through my Ravelry store as well as BrooklynTweed proper. 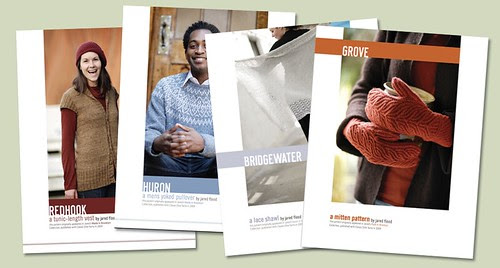 One of the most beautiful things about PDF downloads is that there are no page restrictions. Thanks to my rather verbose style of writing patterns, I really pushed the limit on my page-count when writing the print-version of the book, which ended up significantly affecting the size of the charts which was, while understandable, a real bummer.
That said, the biggest change to the patterns is definitely chart size and clarity -- in most cases they have been re-illustrated and blown up to have their own, spacious page to spread out on. The texts have also been given more breathing room and in some cases have been extended. Each pattern begins with a Pattern Blueprint page which lists all the specifics about the garment and needed materials and includes an alternate photograph as well as a large, clear schematic.
As mentioned above, all the patterns are available either through my Ravelry store or through BrooklynTweed.net -- follow the buttons below to visit either:

I worked closely with a tech editor for all the new layouts and corrected any existing errata that was present in the 1st edition of the print version. I hope you enjoy them and thank you so much, as always, for your continued support!
OTHER ANNOUNCEMENTS
I figure I might as well use this post to discuss a few of the other things that I've been meaning to bring to your attention:
Social Media: I finally got around to setting up a Facebook page (took long enough, right?) -- please feel free to stop by or to become a fan if you're a Facebook user. I plan on using it as an alternate way of posting my teaching schedule and teaching-related announcements (Dates are also always posted on my website), as well as other informal announcements, snapshots, etc.
And if that isn't enough social media for you, you can also catch Brooklyn Tweets (sorry, I had to) on Twitter here, if you're into that sort of thing.
Pattern Wholesale: In the last 6 months I've been wholesaling many of my designs to Local Yarn Shops. If you are a shop owner and interested in wholesaling print patterns, please send me an e-mail and I'll be happy to put you in contact with my distributor.
Phew! I think that's all the housecleaning for the day... although I'll expand this post if I realize there is anything that I've forgotten, which there most likely will be.
Thank you!
¶ 10:21 AM

Comments:
Yay! I had no idea the patterns would be released as individual pdfs - this is great news! :D

Birgitte : 15 April, 2010 11:09
congrats on your newly designed designs! They look great! Lol at finally getting on FBook, took me awhile as well but i love how i have re-connected with old friends, and i think it's much better than MySp. I just can't Twit though, just can't go there!There are enough distractions in life as it is, grin!

Are there any plans to provide the PDF's to those of that already own the book?

Thanks and have a fantastic day!

Unknown : 15 April, 2010 12:15
I agree -- the printed version WAS a real bummer. If I would have known, I wouldn't have spent the money on it and would have gladly spent probably just as much or more in the PDFs.

Liz : 15 April, 2010 12:19
Is there a size adjustment chart out there anywhere? I would like to make some stuff for a child or for my fat head and think it would be nice to see the number to/not cast on or decrease etc..

Lauren : 15 April, 2010 18:33
Just found you recently and was so happy. I have a husband and three boys and love to find great knits for them. I love your designs and can't wait to download the PDF's (my preferred method of pattern)

prjonaperlur : 16 April, 2010 20:35
Brooklyn Tweets! You are SO adorable!
I so appreciate the meticulous way in which you design and write your patterns - they are a dream to knit. Thanks for your contribution to the craft.