b r o o k l y n t w e e d
1.24.2006
Ganomy! Ganomy Photos are finally in!! I took a few shots of this project that was completed in December and gifted to my roommate for christmas. I'm just now getting around to documenting some on-head pictures. (apologies for lack of better light. i wanted to wait for natural light for the shoot, but that would have meant waiting till next weekend at the earliest... 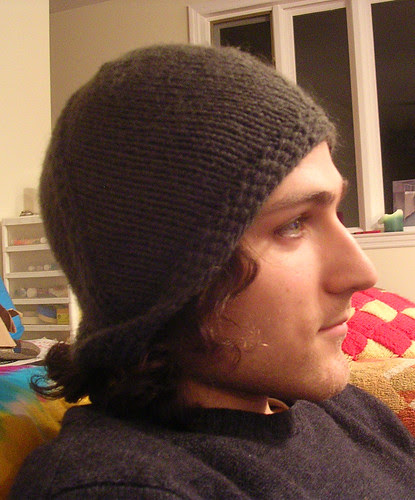 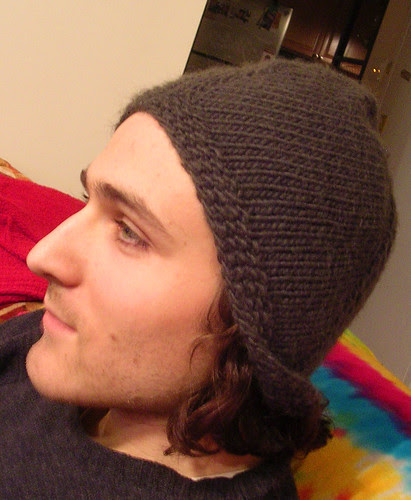 A few notes about the pattern: very simple and creative, yields a really cool design. I made a few modifications, mainly adding in some extra decreasing at the top to keep it from becoming too pointy. if you follow the pattern exactly, you'll have more of a 'gnome point' on top (the pattern also is written to include a bobble-like pom-pom with a ping-pong ball inside!). i like a point thats a bit more subtle. I also did a seed stitch brim which i think looks pretty good. 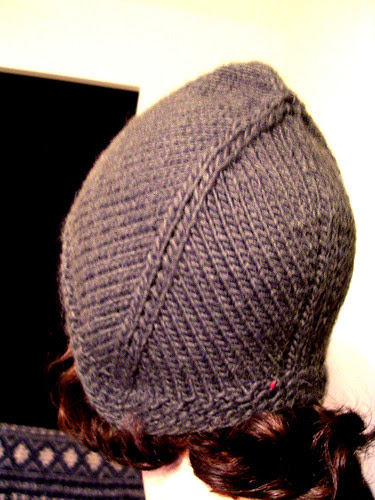 check out those lines! 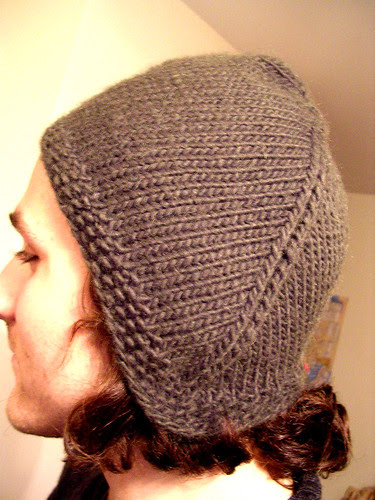 Pattern: The Ganomy Hat from Elizabeth Zimmermann's "Knitter's Almanac" (July Project)
Materials: Brown Sheep Brand Lamb's Pride Bulky [color: Loden Leaf]
Needles: US 9 29" Circulars using Magic Loop
I'm definitely planning on making one for myself in the near future. Possibly in Karabella's Aurora Bulky. Hope you enjoy the photos - i definitely recommend the pattern for anyone in a knitting slump.
¶ 10:35 AM

Comments:
Very cool! Thanks for posting the photos and mentioning your modifications. Its interesting how the hat goes down over the ears and kinda flares up. I am totally going to have to knit one!

But I have to say, I really had to force myself to see the details in the hat with that good-looking model distracting me.

DoryO : 24 January, 2006 14:51
ah! so helpful to see it on. that's really neat and much more "elfin" than it looked laying flat. i love it, and the mods temper the elfin-ness for those of us who are not *actually* elves. thanks for posting photos. think i'm gonna have to make me one of those. are you joining the knitter's almanac knitalong?

Franklin : 26 January, 2006 12:18
WAY cool - it looks great! It's nice to see one knitted up--I can't really tell from the almanac description if it's going to end up as one of those "oh isn't that interesting" projects. Yours is lovely.

When I knitted my Ganomy (which I will post soon), I started decreasing every round after I reached 6.5". If you don't mind me asking, did you do likewise? The top "hump" on your Ganomy doesn't look so prominent. I'm curious what extra decreasing did you do to make your Ganomy rounder?