b r o o k l y n t w e e d
2.10.2008
Handknit Hats I guess it's never too late to share Christmas knitting, is it? As I promised before (this long silence), I'd show a few quick little knits that were distributed under the tree this year and now live far far away. Today's hats both reside in Portland, Oregon where wool's water-resistant qualities are highly appreciated. 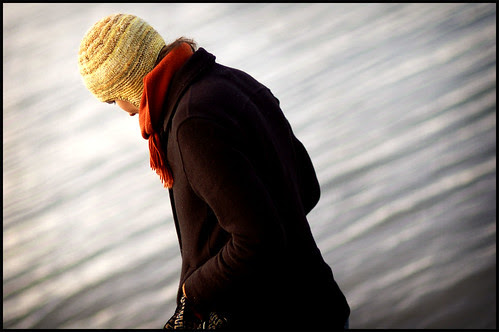 The first is an adaptation of the Thorpe pattern [PDF]. I really liked this pattern (it's knit from the top down, and you know I love that) but knew that handspun was in order so I decided to merge the two. The yarn I had on hand was DK weight so I just tweaked the numbers a bit to work - very easy to do when knitting hats from the top down. It turned out lightweight, fluffy and rather nice for a milder climate. Stripey too. 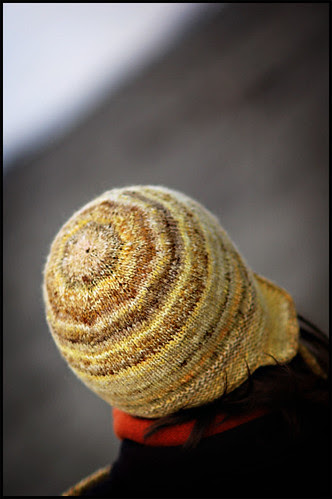 The yarn is a 2-ply merino that I spun last fall with this particular recipient in mind. The fiber was handdyed in sunny California at Pigeonroof Studios and turned out to be a lovely little skein. I actually have enough of it leftover to knit another hat, so you may see this one pop up again in the future. Here's the unknit yarn hanging in the window. 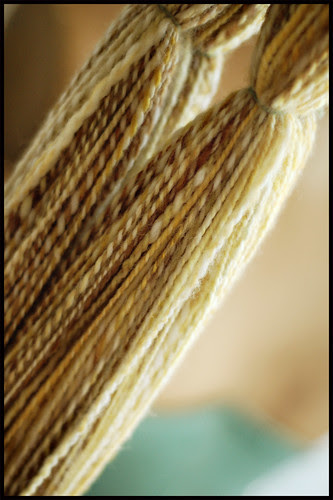 Hat number two was a little stashbusting creation. I had about half a skein of both Silk Garden and Cascade 220, both in neutral shades, both begging to be married. So I put them together and got this. 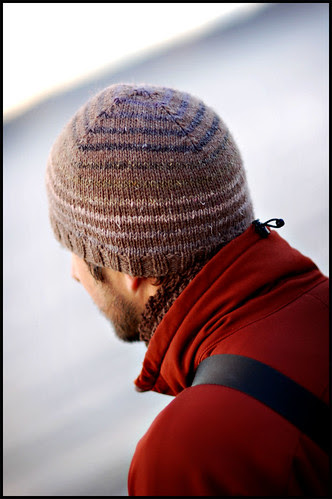 The hat is just about as basic as can be, aside from maybe the crown. I really love how raglan-style decreases create a square-top on hats. I got to thinking of the stripes as circles and thought it might be interesting to throw some squares into the mix. I started thinking of this hat as squares-within-circles and really liked how it turned out. 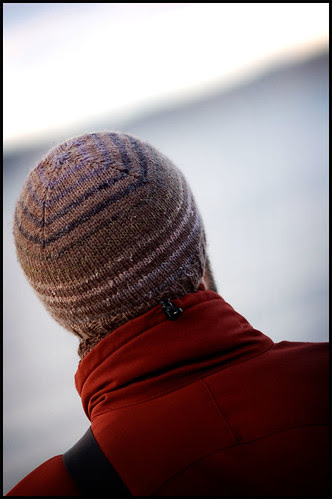 The photos were taken on Puget Sound at Dash Point in Washington State. While we were walking the beach we saw a whole pod of Orcas (thanks everyone!) jumping off the coast - something I've never seen in all my life. And I grew up there. It was pretty great - and you can't beat that Puget Sound light! 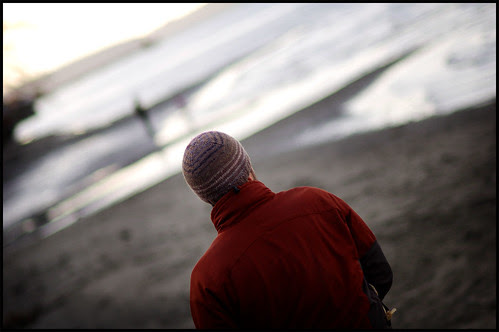 Knitting has been regretfully slow around here lately, but a few projects can pull you through almost any stress-ridden period (thank heaven for Baby Surprise Jackets!)... and when did February sneak up on us?

Okay, here's one more picture of canoodling handknits for the road. 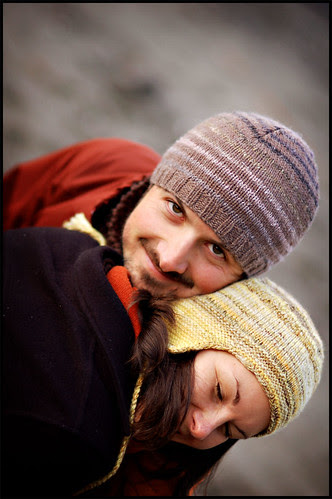 Comments:
I adore your hats! The striped hat is a genius marriage of color and geometry. Great work and they look very well received.

Anonymous : 10 February, 2008 01:31
wow, your handspun of my roving looks wonderful in that hat! Beautiful spinning job, too!

Great hats - I love the circle/square of the second one.

Chelsea : 10 February, 2008 01:40
Holy moley that photography is simply stunning. I mean, I already loved the hats, but photographed like that? Breathtaking. Great work all round (and square) :)

tikru : 10 February, 2008 03:57
I love your knitting, truly! Despite the fact that you are tempting me with learning to spin, dye and take decent photos, but you deprived us of orca pics!!!!!

Anonymous : 10 February, 2008 05:46
Your handspun is absolutely lovely and the hats are wonderful! Beautiful work as usual!

aj : 10 February, 2008 06:33
Your mixing of striped yarns (namely with the Kureyon scarves) inspired me to make a scarf mixing Cascade 220 and Crystal Palace Taos. It is one of my favorite scarves. If I ever get around to updating my blog, I will post pictures of it.

Alexa : 10 February, 2008 06:41
Gorgeous everything (knitting, handspun, photography), as always! Love the stripey hat.
(And thanks for the FLOGS group!)

ps: thanks for the pdf link, it looks like a rowan model but with thinner wool

I love the geometry of the squares within circles hat. Basic yet lovely.

Kirsten : 10 February, 2008 07:57
As I longingly wait for your next blog entry, I often wonder if it is the knitting, the photography or your creative way with words that I apprecciate most....today that question was answered...it is all three. You simply delight me!

I believe orcas swim in "pods," a term which has always made me smile. What an amazing looking place!

Elinor : 10 February, 2008 09:24
Thanks for the great link to Thorpe, I'd never seen that one! It will come in handy for my handspun. I think my Spunky Eclectic Monkey Farts/Wheat Sheaves 2-ply resembles your pretty yellow PRS skein which thrills me to no end.

The squares within circles hat is brilliant as well. Love a good hat post!

Knittripps : 10 February, 2008 09:52
Beautiful, beautiful photos -- what an inspiration. I love the hats too. And I see an earlier commenter, Knittripps, has already let you know that orcas come in pods (like peas?).

materfamilias : 10 February, 2008 10:11
The hats are wonderful (love all the variations in the yellow!), and the Puget Sound photos are making me homesick. I did my undergrad at UPS, and now I'm halfway across the country in Chicago - I definitely miss that light you're talking about!

Allison : 10 February, 2008 10:23
I love the yellow hat, with the brown flecks it reminds me of a vanilla ice cream with toffee chunks in it. Very nice, you make me want to take up spinning.

Courtney : 10 February, 2008 10:46
I called my husband over to the computer to look at your pictures today. While he may be ambivalent about your beautiful hats, your photography leaves no-one unimpressed. Thank you for sharing these with us.

lauren : 10 February, 2008 11:55
Great hats! And, I know that Dash Point beach very well. My father used to fish off the old pier. We lived in Brown's Point. I'm a long way from home here in Potomac, MD, but my heart is always in the PNW.

nicole : 10 February, 2008 14:22
The yellow is an amazing yarn for that hat. Like you said the decreases are in perfect placement for design.
Your mention in the post below I had to peek over at Webs and look for Queensland and as a result I have 12 skeins of Kathmandu DK on my way in a yellow tweed! Thanks!!

Diana : 10 February, 2008 14:49
georgeous as always....is there a generic pattern for a hat with the raglan style decreases out there?...would love to play with it with some stash I have....

Anonymous : 10 February, 2008 15:31
Fantastic hats! You always have something remarkable to offer in knitting and photography. But I must say, the picture I enjoy the most is the last one. What joy!

Rooie : 10 February, 2008 16:26
Great hats; the yellow reminds me a little of crême brulée. Thank you for reminding me of Dash Point. My sister lives not all that far away, and I have happy memories of taking my girls there on a visit.

Lynn : 10 February, 2008 16:56
You know "Puget Sound" is one of those place names that have long fascinated me, alongside "Sargasso Sea" ...
I love everything you show us Jared, beautiful hats, beautifully photographed with lots of palpable love in both. Thanks.

Carson : 10 February, 2008 17:03
Living in the soggy parts of Oregon certainly does require warm woolly headgear. This makes me want to add another piece to my collection of head gear for our wet winters. These are beautiful.

Alisha : 10 February, 2008 17:15
I just printed out the Thorpe patterns yesterday! I have some handspun laying around that is just begging to be made into a great hat like this.
Awesome pictures as alwasy!

Thank you for sharing.

Vellan : 10 February, 2008 18:04
Gasp... when Mum's awake from her nap (she just flown in from Singapore), we got to show her this post. You seem to just churn out such beautiful knits effortlessly. And superb photography too! I love the last photo the best - so much love!

JustApril : 11 February, 2008 11:24
Ah, the southern reaches of the home waters. It must have been the San Juan orcas you saw - they were far afield! A low snow pack three years ago caused a gap in the salmon populations, so our resident pods deserted us for greener pastures last summer. I hope they're finding sustenance down at your old stomping grounds.

Angie : 11 February, 2008 14:13
Beautiful hats. I hope to spin that well someday! Also, the puget sound area is lovely, I am from there so I completely dig your photos :)

IS THAT YOU IN THAT LAST PIC???

Anonymous : 11 February, 2008 16:40
I love your blog! Your photos, your knits, your designs. Everything. Did you design that striped hat or is the pattern commericially available? I would love to make one like that. Thanks.

Sally Anderson : 11 February, 2008 17:49
I am loving the yellow hat, it would be a perfect pattern for a friend with no hair and cold ears!!
I have added your blog onto my sidebar, hope it's ok. I am having a bogoversary competition so come on over and visit!

Liz : 11 February, 2008 19:56
Don't you love Pigeon Roof's stuff? Hence my love for the striping on the yellow hat as well. Nice pic of your brother (or it looks like him at least) and the wife!

Anonymous : 12 February, 2008 16:52
Gorgeous hats and gorgeous photos! I love the combination of handspun/dyed with elements from your stash--it makes the hats look unique and lovely.

Happily Knit : 13 February, 2008 01:27
stunningly beautiful, as usual. And to that I've given you an award on my blog. Thanks for the inspiration!

MadCityMike : 14 February, 2008 06:40
Both hats are wonderful! I really like your adaptation of Thorpe. I'm just learning to spin, and I think I'll work toward making some yarn for a hat like this : )

Elizabeth : 18 February, 2008 12:27
great color working as always! and the light IS beautiful up there - wow! now that i live on this side of the continent i really must check that out sometime. lovely hats - i'm sure they're being well-loved, too. :) gabriella

gabriella : 18 February, 2008 16:16
Hats are good in general, and good, in the specific case of these two as well. I'm feeling a large case of hat-love (to go with my mitten love-case) coming upon me.

Francesca : 19 February, 2008 08:59
I have a skein of yarn I spun from a pigeonroof roving and I had no plans for what to do with it until I saw the gorgeous picture of your pigeonroof hat! The hats are both really wonderful, as is the photography...I miss the Pacific NW SO much!!

Cactusneedles : 22 February, 2008 18:42
I am so quickly falling in love with your patterns, I finished my Hemlock Ring its on Ravelry under needles54 or at my blog
http://lovincomfortknits.blogspot.com

thanks for a great pattern

Anonymous : 26 February, 2008 10:20
I just discovered your blog while procrastinating at the office. Wow... so much to inspire me. I have my eye on your smoking jacket from Son of a Stitch & Bitch. It's going to be my next major project. I want to leave my office, run home, pick up my needles and a beautiful skein from my stash, and devote the rest of my life to knitting. Ah, a girl's gotta dream. Thanks for the wee break from reality.

kjhatt : 30 April, 2008 12:30
Thank you for sharing your patterns with us via your blog. I made your turn the square hat for my grandson and he LOVES it!